While driving Alaska's graveled highways, countless people have no doubt wondered about how an unpaved road surface turns into a bouncing bed of corduroy. Keith Mather, who was studying nuclear physics in Australia in the early 1960s, had the same question. He wrote a paper about washboard roads in 1963. 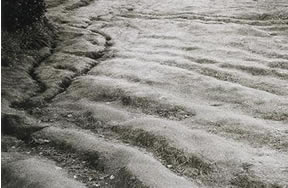 Mather pointed out in his article that many people, particularly in Alaska, see washboard roads as "a welcome assurance of privacy in the outer reaches of suburbia." He also wrote that corrugated road surfaces were a literal pain in the neck in many developing countries, where major highways featured hundreds of miles of milkshake motorways.

He wasn't satisfied with the theories of the time: that "peculiar soil," wind from passing vehicles, car exhaust, or impulses from car engines caused washboard roads. He doubted all these possible causes because he noticed that many different surfaces, such as train tracks and ski trails, can also be afflicted with a tiny roller coaster pattern.

Mather set up an experiment at his lab in Melbourne that cost him 25 dollars in materials. He assembled a contraption in which a tire connected to a central arm moved in a circle. He covered the floor with sand and sent the wheel, which was about the size of a lawnmower wheel, circling around the track.

He described the homespun project in his article: "We moved the wheel around the track by putting a finger behind the shaft and pushing it around the (track) to the beat of the family metronome. Greatly to my surprise this produced fairly regular little corrugations several inches apart in the sand."

Mather found that washboard road developed not only in sand, but also on "roads" of rice grains, sugar, and split peas. The key, he found, was that the surface was dry, as Alaska roads often are in the spring.

The faster he spun the wheel, the faster washboard appeared. With repeated passes of the wheel, he watched the road ripples multiply like snowshoe hares.

Bumps in the road surface cause the tire to hop in the air. Where the tire crashes down, it forms valleys by spraying sand and gravel forward and sideways. The moving tire ramps out of the valley and hops again. Thus, the washboarding process repeats itself.

Washboard spreads across the road as other cars repeat the action of the car that initiated it. Mather pointed out that bumps cause cars to react the same way even though some are heavier than others and have different suspension systems.

He concluded that other than slowing to about 5 miles per hour or using balloon tires that would cushion the road but would also inspire the need for barf bags, there wasn't much drivers could do to prevent washboard roads from forming.

This column is provided as a public service by the Geophysical Institute, University of Alaska Fairbanks, in cooperation with the UAF research community. Ned Rozell is a science writer at the institute.
AlaskaReport.com is a privately owned Alaska news, weather, and information website based in Anchorage, Alaska.