The Naturalist - Phytoplankton Is Our Friend

Courtesy of  KMXT Radio - Kodiak
By Elizabeth Lehmer
In this column, I have often extolled upon the virtues of the various seaweeds, or the macroalgae to be more precise. However, there are distant cousins to the macroalgae that, despite their miniscule size, are responsible for life on earth as we know it. I am referring to what are known collectively as the phytoplankton, tiny photosynthetic organisms that live in aquatic environments. Phytoplankton are found in both fresh- and saltwater environments, and for the purposes of this column, I will be focusing on those found in the ocean. 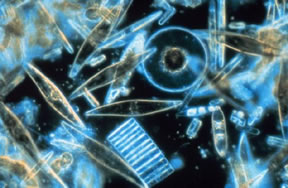 To clarify things a bit, it should be noted that there are a few different types of plankton on earth. Plankton is a generic term used to describe an organism that has little to no powers of locomotion and is therefore subject to the prevailing movement of the water in which it lives. There are zooplankton (free-floating animals), bacterioplankton (free-floating bacteria), and even free-floating viruses in the form of viroplankton. Although all of these organisms play vital roles in sustaining global life, the free-floating plants, or the phytoplankton, are of particular importance.

As with all plankton, phytoplankton are further classified by size- and they are of small stature to say the least, ranging in size from 2.0 to 200 micrometers in diameter. Considering that a micrometer is one millionth of a meter, this is tiny indeed. And although phytoplankton are usually not individually visible to the naked eye, when present in large quantities, they form the cornerstone for life in the oceans- and consequently all of life on earth.

In order to truly understand the significance of the phytoplankton, we must transport ourselves back in time 3.5 billion years, when the planet was a much different place than today. When the earth was still cooling down after being born, and seas had condensed out of water vapor, the atmosphere was thin and full of gases like ammonia, methane, and hydrogen. Ultraviolet rays from the sun all but cooked the surface of the planet while electrical storms raged in the sky.

The combination of this raw energy from the sky with the chemicals present on the earth at this time spawned nothing short of a miracle. In the 1950's, scientist recreated these conditions and found that within a matter of weeks, chemical reactions as a result of this energy among the elements created molecules such as amino acids and sugars. Over millions of years, those molecules coalesced into what are now defined as bacteria- and some of those bacteria developed a means to make their own food using the energy of the sun, with some carbon and hydrogen thrown in for good measure. The hydrogen was taken from the water in which they lived, giving off oxygen as a by-product of photosynthesis. These creatures are known as the cyanobacteria, or blue-greens, and still exist to this day. Although not technically a plant, they are often lumped in with the phytoplankton because of their photosynthetic properties.

Once the blue-greens began to photosynthesize, the world was never the same. The ozone layer formed, protecting the earth from UV rays, setting the stage for a planet that could be inhabited by more and more organisms. 1.5 billion years ago, true phytoplankton emerged, adding to the remarkable contributions of the cyanobacteria to the earth's evolution.

In northern waters, the most abundant phytoplankton are those known as the diatoms. Diatoms are tiny feats of engineering that live in box-like shells made of silica assimilated from seawater. Diatoms have shapes that resemble everything from pillboxes to urns to spiky clubs and can look as elegant as blown glass. Perforations in the shell allow for gas and nutrient exchange within the organism. There is an oily drop within the organism that is ingested by many fish, such as capelin, with are in turn eaten by other fish. It is also thought that this oil in the diatoms is a large part of the petroleum deposits found in the ocean.

Other than helping to create life on earth and producing oxygen, phytoplankton are also important in that they are the basis of the marine food chain- they are the primary producers and the overall effect of their role in the oceans is referred to as primary productivity. Without phytoplankton, there could be no zooplankton, no fish, et cetera. The humble little phytoplankton even directs the migration of certain whale species, such as the humpbacks and grays that visit Kodiak every spring and summer. Phytoplankton are short-lived and respond rapidly to changes in their environment. Not only do they need sunlight, water, and carbon dioxide to survive, like all other plants, they also need nutrient input, such as from nitrogen and iron.

In the spring and summer, phytoplankton are remarkably successful in colder waters, such as those of the North Pacific Ocean, because these waters are richer in nutrients due a variety of factors. Because phytoplankton rely on light, they can only grow so deep in the water. Mixing of the water column during the winter brings nutrients up from lower depths, where they can then be assimilated by the phytoplankton. Therefore, springtime shows an explosion of phytoplankton growth in the polar seas, and all other things in the food chain follow suit. Migratory whales, being the sharp creatures that they are, travel north during this time to take part in the veritable smorgasbord that results.

Because the phytoplankton respond so quickly to environmental change, factors such as el nino and the enhanced greenhouse effect are of particular concern to oceanographers. During el nino years, when the surface of the sea is warmer, phytoplankton populations are not as strong because nutrient upwelling is inhibited. Because phytoplankton are a large sink for carbon dioxide, they are instrumental in regulating the effect of greenhouse gases in the atmosphere. It is estimated that 90% of the earth's carbon is in the bottom of the oceans- largely as a result of dead phytoplankton. Two-thirds of all the photosynthesis that occurs on earth happens in the oceans. Therefore, we need to be concerned about the health of the oceans at the most primary level.

There is a great deal more to be known about the phytoplankton and their effect the planet. Their presence is critical in sustaining life on earth as we know it- and we should be grateful to these modest creatures- even if we cannot always see them. So, the next time you are watching whales, eating fish, or even taking a walk in the woods, remember that these things would not be possible- and that we would not even exist- without the contributions that the phytoplankton make to our world.

Elizabeth Lehmer, former Naturalist with Alaska State Parks on Kodiak Island, has been an environmental educator for ten years, and has taught a diverse range of subjects to a wide range of people during that time. Whether teaching global wildlife ecology for The Oregon Zoo, forest and fisheries ecology to sixth graders in the Pacific Northwest, or the natural history of Kodiak to the general public, Elizabeth finds that she is happiest being in the outdoors educating others about the complexity and elegance of the natural world around us. Her experiences have taken her from the lush old-growth forests of the Cascade Mountains to the coastal rainforests of Kodiak Island, where she now resides.
AlaskaReport.com is a privately owned news, weather, and information website based in Anchorage, Alaska.