July 10th
The Alaska Governor's race is about right and wrong vs. right or left
July 8th
Ben Stevens cost US a lot for his father to try groom
July 6th
Bottom trawling: Always a good choice. Not
July 3rd
"Congress is instructing us": Part II
June 30th
Alaska Department of Fun and Games?
June 29th
A Cool Wind Blows over the North Pacific Fisheries Management Council
June 25th
Endorsing the Alaska candidates and Who is the United Fishermen of Alaska?
June 22nd
Guv and Lite Guv, Live and Let Live
June 21st
Celebrate Alaska halibut
June 17th
Fishing Vessel "Alaska Don"
June 14th
Celebrate Salmon!
June 11th
Does Fish and Game really want local control? Not
June 8th
Bottom trawling and Sector Management
June 6th
The "Generals of Ratz Debates" continues
June 5th
More debate on who the Generals of Crab Ratz are
June 2nd
More debate on who the Generals of Crab Ratz are
May 31st
Corporatism, and the 'rebuttal to the defense of Ted and Don'
May 29th
"Alaska got primary control of the big money fisheries..."
May 27th
Yes, Virginia, there is a real Council, someplace
May 25th
The real fish Czar, or the strip mining of Alaska's waters
May 23rd
Take that four-barrel off that Council
May 20th
Board of Fish and Valdez meeting, or gillnetters beware
May 15th
Lobbyists make fisheries laws in the U.S.
May 13th
Dishonest academics in the National Fisheries Debate
May 10th
Science vs fuzzy logic in the National Fisheries Debate
May 8th
Funny how if the fishermen suffer, so do the towns
May 6th
Hunting the noble crab rats: Part III
May 4th
"Property and Fisheries for the 21st Century"---a scientific paper
May 3rd
AlaskaReport as Fishermen's Forum and Change Agent
April 27th
Hunting the NOBLE crab rats: Part II
April 26th
Blog the truth and the truth shall set you free
April 23rd
More crab rats hunting stories
April 21st
Confused about RSDAs? Vol. I
April 19th
Hunting the wily crab rats
April 17th
Political strategist as fisheries manager?
April 16th
Fishery Councils should stick with resource management
April 13th
Everything you wanted to know about True World Foods in Kodiak
April 11th
"Rising Sun," "Spirit Bear"
April 10th
A reader's lament over lost opportunities in the fisheries
April 7th
"Reader Weekend," on processors, et. al.
April 6th
The cure for fisheries add-ons in Washington D.C.
April 5th
North Pacific Neighborhood Watch
April 3rd
Is the NPFMC even legit?
March 31st
Bundrant says Trident is "small potatoes"?
March 30th
Will the real owners of the crab please stand up?

A Picture of Greed and Other Fishing Photographs

It's such a nice morning I'm going to talk about photography in the fishing industry. Cool site No. 1 comes to us from a longshoreman/fisherman in Unalaska. 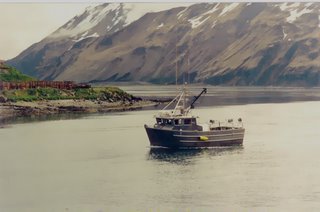 This Pacific cod jig boat is typical of efforts by the residents of Unalaska/Dutch Harbor to catch some of the Bering Sea bounty themselves.

The picture of the skipper leaning out the pilothouse window reminded me of the first gillnetter my brother and me fished in '65. You could warm your back on the stack, which was against the back of the pilot house, and put an elbow out one window. He sent me this letter with the websites with his photo galleries at the bottom.

"Hi John,
I enjoy your take on Alaska politics, especially when you hammer on the fishery issues. I live in Unalaska and have gone head to head with our local politicians on more than one occasion about a number of issues. Most recently I went on a duel of letters and opinions about crab ratz with Frank Kelty. He was so badly beaten by me in the local paper that he stopped writing and just shut up. If you know Frank, you will understand just how significant that is.

I work as a longshoreman and one of my friends is Pete Hendrickson. You probably know him as he's been involved in fisheries issues out here for a long time. At any rate, he mentioned that Stephanie and her gang are going to be here sometime before the end of the year for their annual meeting. I understand it's going to be held at the Grand Aleutian Hotel.

I've known Stephanie for a long time, probably 16 years and have had the priveledge of flying with her late husband on quite a few occasions. Just the other day I was driving past our local airport and noticed the new name given to it. "Tom Madsen Memorial Airport" (or something close to that.) What I'm getting at is this: Tom was born in Kodiak. His dad was a famous bear guide and local character, Alf Madsen. When Tom decided to move from Kodiak, he chose the Aleutians, specifically Unalaska. During his time here, he performed many miraculous feats with his airplanes, including flying locals out of here on medical emergencies when mere mortal pilots wouldn't go near their planes. Tom loved the Aleutian and Pribilof Islands and all of Southwest Alaska and he was of great service to all who live here. I find it ironic that his wife would, at the stroke of a pen, damage the entire region with her promotion of crab ratz. In fact, it turns my stomach.

I'm thinking of writing an open letter to Stephanie just before she arrives here and ask her why she hurt the communities her husband loves so much. In your opinion, do you think that's hitting below the belt? As you can tell, I wouldn't make a very good politician....I have morals.
Take care and keep up the good work,"

Dan Parrett
web.mac.com/dparrett/
danparrett.com
Shoot, I wanted to talk about photography, but I see this letter is getting me sidetracked. First, Dan, the more we get everything out on the table of public scrutiny, the better off we'll be. You know, in some places in Europe, they have town council meeting right in the town square and everyone comes. No hiding anything from anybody. Their system has had a lot longer to evolve than Alaska's, that's for sure. Sometimes I think our political system is devolving into pure personal gain.

Dan, you mention Stephanie Madsen, the current Chairman of the North Pacific Fisheries Management Council, that the people of Kodiak call the "Red Queen." These kind of people go where the money trail leads. And at the moment it leads to the big corporations in the fishing industry. Ironically it was another woman, from Kodiak, who was also instrumental in ratcheting free enterprise down a big notch. Now she's jumping on the bandwagon of the leading candidate for Governor where the platform is diametrically opposed to what she has stood for in the past. It's not necessary to say "go figure," because you can figure "personal gain" there.

Red Queen No. 3 is a Groundfish Data type who has been the constant nemesis of the rank and file of fishermen of late in the Gulf of Alaska. This proves my point, in a way, that fishermen are going to really suck it up the tailpipe if they don't get professional, across the board, full-time representation. Someone from the food industry in the Lower 48. Maybe the RSDAs all together can afford such help. It isn't working the way it's going. Fishermen know it, and everyone else is taking advantage of it full bore.

When you have fish buyers in Alaska also buying $47 million French corporate jets, and this is not an isolated case, and then see pictures of these grizzled fishermen in today's mentioned picture gallery, you know something is fishy in the income distribution department. It's just that you've had Governors who would go along with these "billion dollar boys" in controlling the marketing; through the Alaska Seafood Marketing Institute's processor listing service, and generic marketing, etc., the 13 year delay in supporting the RSDA movement, cozying up to fishermen's representatives who only support a few other rich fishermen and have processor ties, and sending free enterprise axe-men to represent the State of Alaska on the NPFMC.

What a mess, and it's such a nice day out too. I'm going out and work on my old Mustang. See ya later.

P.S. Dan, it's a shame your local paper isn't scanned by Google News so people all over Alaska can easily get news from "the Nation's largest fish port." Making your debates and news more accessible would help all of the rest of us help you balance Alaskans' desires with those of Seattle and Tokyo. Unalaska/Dutch Harbor is the processing and shipping port for the huge Bering Sea marine resources and has spawned processing and marketing behemoths that are threatening to gobble up the rest of Alaska too. I get a ton of industry news from Viet Nam, Australia and Scotland, but zero from Dutch Harbor.

See more at John Enge's Blog John lived in Alaska for 50 years and has run commercial boats and processing plants. John also served as a loan officer and economist for a "fishing bank" and served as the only Fisheries Infrastructure Development Specialist the state has had. He has owned a marine design and fabrication business and created the best-selling "Passport Alaska." All photos on his blog are his own, unless so noted.