A public watchdog and advocate for fishermen and their coastal communities. Taufen is an "insider" who blew the whistle on the international profit laundering between global affiliates of North Pacific seafood companies, who use illicit accounting to deny the USA the proper taxes on seafood trade. The same practices are used to lower ex-vessel prices to the fleets, and to bleed monies from our regional economy. Contact Stephen Taufen

Sorry we can't get off the updates in real time. Rest assured the testimony on GOA Ratz continued to be 90% or more in favor of free markets, not privatization. The shocking part to the Council was how the entire day-and-a-half stayed professional, widely representative, and NOT radical in any sense of the word. So much for the Council fears and propaganda about Kodiak being some kind of fringe group out on the island that represents the top free enterprise fishing port in the world. 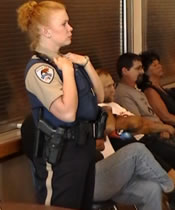 with firearms and bulletproof vests to remind fishermen the divide between the classes. However, it backfired on them, as Kodiak's local police ended up smiling on behalf of the community (of course, our cops are a low income segment like us, and pro-constitution, pro-law, too). One cute officer smiled at us after learning we had the American flags once more placed behind the Council during lunch.

We are waiting for copies of the tapes to get quotes for the readers, but the whole process here is overburdened with important issues. Amendment 80 on post-AFA attempts by large corporations to now assault the H&G non-AFAs etc. was tense yesterday. But a remarkably well organized H&G sector brought into Kodiak about 13 folks, including presidents of global buyers and distributors to protect the market for high quality frozen at sea products.

We should be getting a copy of the president of Tradex's public comments today, and will post them up. It is not just Alaskans and Seattle corporations, but Icelanders, Canadians, and their global marketing channels who are affected by the Council decisions, and they were here to be heard. 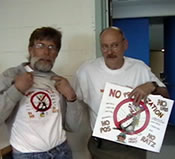 The high school auditorium held hundreds of concerned citizens and fishers. Kodiak resident crabber and halibut fishermen Ludger Dochtermann (F/V Stormbird and North Point) was the artist on highly popular T-shirts calling for 'No Privatization", No PQS, NO RATZ. Nearly 100 shirts were worn by the fleets and local businesspersons throughout the day. Over 700 signs went up in business windows all around Kodiak's downtown and waterfront in opposition of GOA Ratz.

At one point, Lu donned a Nutcracker Rat suit and faced the Red Queen (Chair Madsen) and the Council as King of the Dying Rationalization Schemes - a rather somber moment due to the graphic representation of the truth of over 90% opposition to the new management regime that would harm communities.

Native fisherman, Philip R. reminded the council that his people have been here over 10,000 years and he opposes giving away the resource to corporations, let alone anyone else. In his concluding statement, he pointed out, "I once was a child, and I had a government that looked out for me. Now I am an adult, and

I have a government that wants to hurt me." Throughout the two days, many testified about the immorality of schemes to grant corporations and a few large fishermen control over public resources.

ADF&G Commissioner McKie Campbell, played the role of chief femi-Nazi for the elitists as he continually acted like the Public and fishermen had failed to inform the State of what we wanted. It was a classic propaganda move, accusing the stakeholders which the State and Federal joint "coordinated rationalization" committee had left out for the past 8 years, of not contributing to the process. Has Herr Campbell not read the GAO report about how it is the Councils' fault for not having core principles and proper systems for fair stakeholder input. In a fair world, Campbell would face trial and the guillotine.

Campbell later took State control over the federal council, and mischaracterized the Congress' orders in 2000 to examine WHETHER any rationalizations were needed or not, as ORDERS from the Congress to do ratz programs. He was fighting back against Groundswell testimony earlier that pointed out they failed to obey the federal law's instructions. The only reason he's trying to dialogue now is to shift blame and entrap others into the end game of GOA Ratz. It won't work. Wait until December when GOA comes back (maybe). Campbell won't be there if our new governor has any

Trident in-house attorney Joe Plesha kept constant watch on the proceedings, a clear sign the major processors were concerned about the changing face of Ratz. Not that Trident has hurt the Gulf side, but surely it must be concerned that pollock and crab ratz schemes could be turned back were Congress to discover the real truth of the anti-constitutional schemes.