On Sunday, August 20, 2006 a highly deceptive advertisement appeared in the Money section (page F7) of the Anchorage Daily News, supporting incumbent governor Frank Murkowski in Tuesday's primary. It's title, "WHY UNITED FISHERMEN OF ALASKA SUPPORT THE RE-ELECTION OF FRANK MURKOWSKI," has started an angry flurry among coastal fishermen who have major criticisms with the phony ad. 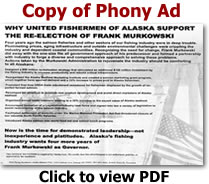 First, it is outright deceptive advertising, based on multiple grey lies. Second, it purports to speak widely for fishermen of Alaska, as if they are united (contrary to all polls) behind one candidate, while usurping the name of United Fishermen of Alaska (UFA). Third, it was paid for by Southeast Alaska Seiners (SEAS), a single member of UFA. Fourth, the size of the ad (10-1/2 by 11-1/2 inches) indicates that its cost may even have exceeded allowable contribution limits.

Fifth, Rob Zuanich and Bobby Thorstenson have been working together for years to take away rights from more numerous groups of fishermen - starting in Puget Sound, next moving to Alaska. These stateless souls will take up residency wherever and whenever it suits their corrupt purposes. And sixth, they backed a loser, soon to be retired from Alaska's political scene. But even though this incident will be moot in a few hours, we thought you should know how the ad came about from both UFA and SEAS.

Repeat offenders, Robert Thorstenson Jr. and Robert Zuanich, are the co-owners of the 410 Calhoun Avenue building in Juneau where tens of millions of federal and state money have been funneled to good old boy corporate insiders through the Alaska Fish Marketing Board, and where a seine buyback operation was to be run by a select group, instead of fairly administered. It's the same Calhoun address that is listed on the "paid for" line of the ad!

Robert Thorstensen Jr., president of a state-registered association actually named United Fishermen of Alaska (UFA), apparently directly worked with Southeast Alaska Seiners (SEAS) through his business partner, SEAS Treasurer, Robert Zuanich, on the ad. Official sources verified late today that Rob and Bobby had spoken together to the staff of the Alaska Public Offices Commission about paying for a joint advertisement. But eventually they decided that SEAS would sponsor it alone, and include the independent statement that distances the ad from the candidate himself.

Every child recognizes this kind of chicken poop stunt. The ad blatantly and deceptively continued to use the words UNITED FISHERMEN OF ALASKA, while Bobby T knew that many in UFA's membership would have opposed backing any candidate at this time, especially the one clearly losing in the polls.

Now, in light of earlier public endorsements by UFA of Frank Murkowski, and given that Bobby T was right there with Zuanich, is there any doubt this was a plot to avoid UFA membership voting on the matter, yet carry their association's name and weight to the new endorsement? Why would UFA even allow one of its members to post such an ad using the name-words of UFA?

The issues here are the unethical actions of the culprits and the deceptive lies, not the candidate endorsed. But the ad also credits Murkowski's Administration with many false achievements "that should be comforting to all Alaskans," as well. From 1992 to 2002, the ex-vessel value for all Alaska seafood dropped by an astonishing $1 billion on an annual basis. A governor bent on truth would do something to improve that figure, not concentrate on statistical lying under percentage factors, ignoring the real drop in the share of value that goes on the fish tickets instead of into foreign tax haven coffers.

Much of the export increase illusion is from lower value per unit movement of increasing volumes of primary products, exports cheaply destined for foreign tax havens like Thailand. That's where corporations not only can take advantage of cheaper labor, denying Alaskans of jobs, but also take huge advantages of the illicit bookkeeping techniques of Abusive Transfer Pricing to deny revenues and taxes within a U.S. or Alaskan tax nexus. This creates extraordinary economic losses for Alaska as the revenues (and profits) fail to multiply in the resource acquisition state. It is contrary to "the owner state" concept.

The Murkowski Administration is hardly responsible for an increase in prices to fishermen, because it has never considered ex-vessel prices as being relevant to the Salmon Task Force concerns. It was Ben Stevens' job as chair to ensure that ex-vessel prices were not discussed, and neither governor Knowles or Murkowski corrected that. Murkowski talks about making sure every Alaskan has a right to go harvest fish in a way that sound like a Southern pre-Civil War governor saying all slaves have a right to pick cotton - they just can't share in the profts.

We are a very long ways from fishermen being paid proper prices, except in systems like Halibut and Black Cod IFQs, where the fishermen got control and broke away from the powers of large processors. Rationalization schemes (corporate privatizations and consolidations) are the result, as processors never want to face independent fishermen and real marketing, outside the closed-class processor cartel, again. They never want to face new, smaller, more innovative processors, either. And they are scared to death that Frank won't be there to help ensure the schemes continue.

UFA members who actually have fish harvesters in their subgroups, harvesters who live in fishery-dependent communities across Alaska, should call for the immediate resignation of Bobby T and a good share of the board. The State of Alaska should investigate the incident, and also look into Robert Phillip Zuanich's operations (like Stikine Holding, LLC), and more.

When you go to the polls tomorrow, take into consideration that this is the level of drastic last minute tactics which Zuanich and Thorstenson feel they have to stoop to, on their own volition. Ask yourself why they could not poll permit holders (UFA hardly represents real fishermen!) and post a more honest ad. Or why they couldn't choose a winning candidate that would offer all fishermen a future.

A public watchdog and advocate for fishermen and their coastal communities. Taufen is an "insider" who blew the whistle on the international profit laundering between global affiliates of North Pacific seafood companies, who use illicit accounting to deny the USA the proper taxes on seafood trade. The same practices are used to lower ex-vessel prices to the fleets, and to bleed monies from our regional economy. Contact Stephen Taufen
All images, media, and content copyright © 1999 – 2015 AlaskaReport.com and Groundswell Fisheries Movement – All rights reserved