The National Fisheries Institute (NFI) says a Democrat and a Republican working together must mean their amendment to the Magnuson-Stevens Act must be "exceptional"! 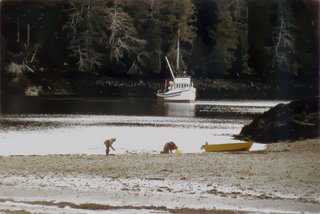 My visit to the Japanese owners representative of our fish company, and this scouting expedition for herrng, started the rush for roe-herring gillnetting in Alaska. (We only got a couple buckets of clams that first year. Steve Enge and Craig Norheim digging.)

The only thing that's exceptional is how far off government and fishermen's estimates of the value of their catch is. (Democratic and Republican governors of Alaska have equally advanced the "poor processor" mentality for years.) Surely nobody believes now that Richard Pombo, a real estate person, has a crystal ball spelling out a perfect solution in fisheries management that unites the parties. There's enough billions of dollars in the fisheries for both parties to devise strategies to partake of the seafood industry food chain.

After you read about the NFI saying how healthy the fisheries are, then read the following article on there not being enough fish.

Here's an excerpt from the latter article.

"The National Marine Fisheries Service recently painted a rosy picture of the country's ocean fisheries, noting that most fish species are not being over harvested. This assessment does not hold true, especially for New England, according to a soon-to-be-published study. The study finds that only three of 67 types of fish labeled by federal regulators as "overfished" in 1996 have seen their population increase to the level deemed acceptable by NMFS.The study is further evidence that a bill in the U.S. House of Representatives to weaken existing federal fisheries regulations is misguided."

Now, the NMFS is being called "morally bankrupt" by many Congressmen in California and Oregon because of their stonwalling of the king salmon fishermen that need help. This after the Administration killed off one of the main sources of their income, the Klamath River king salmon run, to get some more votes for a favorite candidate. It's not just "nymfs" who's at fault here, it's the whole package of partisan politics, Red against Blue. The Republicans have glommed onto the cash cow and the big losers in their not wanting to let go for a second are the rank and file of fishermen.

Again, it's about staying in power by the Republican led Congress and the processor dominated fishing industry. Take a look at the food chain. First, you have the fish. They eat other fish and plankton at no cost to the taxpayer. Second, you have the fisherman, who gets the fish "not free" because with privatization (rationalization) a fisherman has to buy an expensive permit, or quota shares at so much a pound. (Halibut quota shares are up to $20 a pound, compared to a dock price of a few bucks a pound.) (You can see why a lot of fishermen want privatization, especially the more well established ones.)

Third, you have your processors. A more cutthroat bunch you'll never see. Their job is to try to get the fish free by cutting out the fishermen and maximizing their profits, you know like they teach in Harvard Business School. The Senate version of MSA Reauthorization provides for this real nicely. I don't understand cutting out a step in the food chain. If seals bypassed eating fish, they would have to try munching on plankton. Just like cutting out the fishermen who support the towns, it's not guaranteed to work.

Fourth, you have your trade associations, like the Pacific Seafood Processors Association, who lobby like mad for the processors' interests, hire people to represent them on law making bodies (amazing!), threaten state employees' jobs, etc. The PSPA will collect $3 million a year for these functions from their members.

Fifth, the National Fisheries Institute is made up of PSPAs from all around the country, along with brokers and wholesalers. Their job is to keep the applecart from being upset. A lot of influence on the Congressmen is represented in the mouthpiece for NFI. Of course they say whatever advances their agenda, and right now it's encouraging that scourge of endangered species and other valuable chunks of civil society, Richard Pombo.

Sixth, you have your Congressmen who fly in Number Four's fourty odd million dollar jets to paid-for fishing lodges and get investment opportunities nobody else gets. Is all they have to do is keep Four and Five happy. You have to be brash and loud to foist on the public the malarkey that gives 4 and 5 what they want. You also have to ignore and marginalize anyone who gets in the way of this process. And you have to get voting for your stuff to be unanimous, one way or the other, to make it look to outsiders like you have a perfect scheme for everyone.

I'm going to stop there because I don't get any hint that the President knows or cares about this particular food chain. The National Marine Fisheries Service is up on top of the food chain somewhere, in the Department of Commerce. They aren't capable of gobbling up someone under them. They are just happy to continually nibble for their nice salaries and not draw attention to themselves by taking too big of bites like the rest of the seafood industry food chain.

Right now, rank and file fishermen have their tail fin clipped by not having EFFECTIVE representation. That allows the processors to easily swim up behind them and gobble up as much of the value of the fish as they can digest (literally thousands of fishermen being told they can't fish anymore for one reason or other, paid low ex-vessel prices, trickery at every turn.) And they can digest a lot. Ever see that movie about the kid who spends a million dollars? The rest of the food chain above them encourages the feeding frenzy so they can get bigger bites later on. Reminds me of a song we used to hear on the radio, camping at Castle River in Duncan Canal in about 1963, called "Oh, when will they ever learn."