Is ours unbiased, peer reviewed and objective fisheries policy?

"It's incredibly important the science is unbiased, that it is peer reviewed and objective," said Myers. "That's the way it needs to be so the survey can deliver objective information." 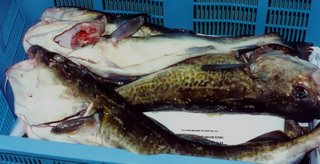 P. Cod from Sand Point heading for Korea. The operation shut down when the local processor threatened to not sell home heating oil to the fishermen.

This from Bush's nominee for the head of the U.S. Coast and Geological Survey is Mark Meyers. The Gulf of Alaska bottomfish fishermen and the communities most effected, namely the City of Kodiak, would dearly love the National Marine Fisheries Service to say the same thing about managing the fisheries out there.

This is how it has been going in managing that immense area and the abundance of near-bottom demersal species: You have public meetings where 95% of the public objects to the direction the North Pacific Fisheries Management Council is leading the industry, then the Murkowski administration and NOAA/NMFS declare that Congress is "instructing them," like they are good little school children, then the NPFMC Chairwoman chortles over the death of the leading watchdog on accountancy issues (Transfer Pricing, etc.), Ted Stevens writes law onto other pieces of legislation of extreme National importance that axes a thousand fishermen and gives the seas bounty to the already filthy rich, into perpetuity.

Then try reconcile what goes on in the Council process with this statement from Sen. Lisa Murkowski's new fisheries aide: "The Council pays close attention and is always listening for things that can be incorporated into different management plans. I do bristle a bit when I hear people say they are ignoring the public, because I think the Council is responsive."

It darned near makes you want to scream. I have nothing against Arne Fuglvog, the new aide, he's one of the nicest guys you'll meet and his family is from the same little spot in Norway my family came from. It's just the mind set of the whole Council process, that you forward the studies that make whatever you are doing look good, that you stack the Council and the Advisory Panel with a certain type of person, etc. This is no secret. I'd just like to see a little more of an unbiased approach to fisheries law-making, since it's fishermen's livelihoods and the health of their Alaska communities on the water you're dealing with, the 95% of the industry.

I know there is a lot of industry infrastructure in Seattle, like the brokers and remanufacturers. But these folks get to handle the fish no matter who in Alaska, the Alaska fishermen or the Seattle and Tokyo-linked mega-fishermen, get's the bulk of the benefit of the resource. Right now it's the latter. Largely it's a decision the Governor of Alaska makes as to who he favors. Poll numbers show that folks in Alaska are favoring the former and the candidate for governor who is sympathetic to them.

Here's a letter from a fisherman in the heart of the Gulf of Alaska, not nearly the area where Lisa Murkowski's new fisheries aide grew up:

John, NMFS folks came to town yesterday to meet with the Draggers. Well, not just the draggers, but that's all that came because of the surreptitious way it was annoucced in advance. They say the "Rockfish Pilot Program" will start at the first of '07 and will generally follow Julie Bonney's plan as told to us years ago. Stevens made it law with a "rider". It's 100% IFQ's and processor quotas via "Co-ops". The NMFS guy, when asked if this was really going to happen, said oh sure, it was "Congressionally Mandated". So the great charade reaches a milestone.

The end is in sight. This is the most dangerous time for "them". There's still the possibility that we might figure out what's happening in time. This is a plan that's been in the works for decades, and the power of it has even driven fishery management over the years to store up a vast resourse by under harvesting. Once their plan is in place, they'll start raising the Rockfish Quota, the "TAC".

For every added lb of Rockfish they'll get that much more of the Halibut and Cod for by-catch. As the by-catch increases, the value of any IFQ's held by local families will decrease accordingly. What kind of numbers are we talking about here? Here's a sample. In 1967 the foreign fleets took 44 times the present day harvest. These days drag skippers and crews tell of mind boggling masses of Rockfish out there.

IFQ shares are about all a lot of Kodiak fishermen have these days. These will be degraded over time. The equity will evaporate. Meanwhile we're all tied up in a debate that has very little to do with anything. Yes Cod is a big deal, but it's just one very fickle fish that likes to totally dissapear for 30 years at a stretch and seems to be already starting to do that.

They've hidden the hook well but it's there to see if you want to look.