Leveling the playing field for candidates and fishermen

Jim, incredibly, there still is a whole rainbow of attitudes about the prosecution of harvesting and processing and how we feel about the old guard cannery owners. 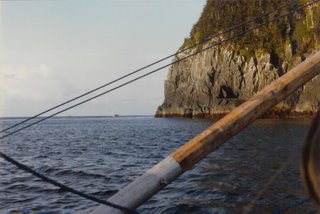 I enjoyed the care-free, hunter-gatherer lifestyle of a independent commercial fisherman for awhile. When someone cut my allowed gear in half, it wasn't care-free any more.

Obviously we're on diffrent sides on Bob Thorstensen, one of the processing giants.We will all start to come together, and maybe then get going in the same direction, after we get everything out on the table. That's why I appreciate e-mail so much, it helps this process immensely.

Most everyone thinks the big processors are getting too greedy now. That's no news. But it's not new either. Icicle Seafoods got the Petersburg Cold Storage under clouded circumstances 40 years ago. My father and other stock holders like Washington Fish and Oyster Co. lost their stock in the deal. I know it's easy to shower respect on hardnosed, politically connected and wealthy men. I know you have a great deal of respect for Big Bob T and I'm a little jealous of people that can cruise through their careers and "see no evil." It makes life a lot easier.

But my father also lost his seine fleet and his foreman to Bob. Whereas Bob concentrated on dominance in areas of the state's fisheries, my father just ran a plant and helped start institutions in the state to help all fishermen: AFDF, FITC, ASMI. He worked for Bob after leaving Whitney-Fidalgo. I was a fish buyer for Bob one year too.

An associate ran into Bob, Wally Swanson and Bud Samuelson in Kodiak last week. Bob has NOT stopped being involved even after getting Parkinsons, and not MS as you report. Don't shoot the messenger. I do lose a lot in the process of shedding light on the fishing business. Not many seafood companies that operate in Alaska would hire me now. I've got a sale going on burned bridges these days. But one of these days I'll print a bunch of the letters of appreciation I get from fishermen who are still struggling in the business.

In the credibility department, I'll just say that I'm probably the most widely read fisheries analyst in the state. And the readership is shooting up fast. I don't get any satisfaction out of pointing out what and who is wrong in the fishing industry. I could also make a case that fishermen haven't tended to business and have concentrated on attacking everything except the problem. Because in really tending to business, they immediately become modern small business men, and that's a little mutually exclusive of being a hunter/gatherer. Hence the need for real BUSINESSMEN to help large groups of fishermen at one crack via the RSDAs.

Since you are now using your S.E. seine boat as a charter boat, I wonder if you see the odd coincidence in the precipitous drop in seine salmon prices at the dock and Bob's investing heavily in plants and equipment from Washington state to Adak and the Pribilof Islands. The latest acquisition being a cannery on Kodiak Island just this spring. I'm sure if the seine prices hadn't dropped so much, and I remember getting 68 cents a pound for troll humpies as opposed to ten cents now for seine fish, you and hundreds of other seiners would still be fishing.

The previous owners of plants and other infrastructure like boats, permits and quota shares, are walking away with the capital that could be going to prop up prices and continued investment in vessels and equipment. This is the system fishermen may not have wanted, but allowed, by not speaking up. Well, I won't go through the whole cause and effect here. Some people have written extensively on this; it just doesn't seem to make it into the mainstream of fisheries politics because it doesn't serve major players like Big Bob who have long controlled fisheries politics in Alaska.

I don't wish harm on any of these processing and marketing behemoths, I just wish they would work with fishermen more. Hence my fifteen years of work towards Regional Seafood Development Associations. They give the fishermen a face to do peer to peer business with the processors so they both can benefit and stop the century long adversarial relationship between them. The solution is not going to come from power plays at the Council or at the Board of Fish or in the Legislature. The solution is going to come from new STRUCTURES that promote unbiased and methodical decision making.

And new structures will come from a fresh perspective in Juneau. From an new kind of Governor that recognizes that Alaskans are suffering at the hands of powerful industry players, not gaining somehow by getting crumbs from their acquisition of immense wealth. And not just Alaskans, but fishermen from Washington and Oregon too, that fish the waters off Alaska.

You can guess what the processors and processor linked fishermen's organizations are doing now. They are endorsing anyone except Sarah Palin full speed. The Alaska street is behind Sarah and that scares these processors all over Alaska that have been counting on cooperation from the Governor's office to acquire processor shares for all species. For the uninitiated, that's like a giant limited entry permit to harvest fish without the use of independent fishermen, like the fish traps were before statehood. They will still need to pay someone a token amount to go get their fish for them, just like the canneries needed the physical traps and trap tender vessels and crews before 1959. It increases the value of their shore plants immensely.

The other day, I was talking to a fisherman, who has always been up to his eyeballs in fish politics. I asked him if he thought fishermen were getting more astute in picking a gubernatorial candidate. He said he still gets fishermen that say, "Just tell me who to vote for." He tells them that they can probably vote Republican, because 60% of voters are registered as "party not indicated," or however it's done when you don't pick a party.

I talk about another Thorstensen operation occasionally, the United Fishermen of Alaska. Young Bob announced that the UFA would endorse Murkowski, but here's the scoop on that. Even though they claim a membership of 34 fishermen's organizations, 8 of those are aquaculture associations (salmon hatcheries). The big processor lobbying organization, PSPA, is one of them. So is the King Crab Coalition of Seattle, who helped in a big way to fire those thousand king crab crew and skippers. The Alaska Trollers Association pulled out of UFA a couple of years ago, and the Southeast Gillnetters Association voted "no" to backing Murkowski.

Actually only 11 of 34 UFA member organizations voted to back Murkowski. The UFA Board never did vote and the bylaws were fudged in a haste by Bobby to endorse a candidate that will help them thin out the ranks of fishermen.(Buyback, Ratz and other thinning techniques they back) Their basic plan is that it's easier to get rid of most of the fishermen through a governor like Murkowski, to the boost bottom line for the few, than innovating in the marketplace for the many.

So Jim, when you say I hurt my credibility by talking like this you may be right. When you get in the trenches you get dirty. I am a firm believer that this isn't about ourselves though, but what we can do for each other, and if some folks think that's a bad thing, so be it. It's a good thing I don't know all these candidates for governor who are suspect of trying to smear Sarah Palin. You'd really see my credibility drop. Sarah's job is to be Governorial and to keep having "moxie"* and not letting anyone knock it out of her. My job is more in leveling the playing field. The readership we are getting on AlaskaReport means I'm a bulldozer driver these days for independent fishermen, and now, people-oriented political candidates.

It's better if you're born with moxie like Sarah Palin apparently was, but nevertheless you fisher-wives can try www.moxylife.com to get some of your own.