Everything you wanted to know about By-catch, but were afraid to ask the Council 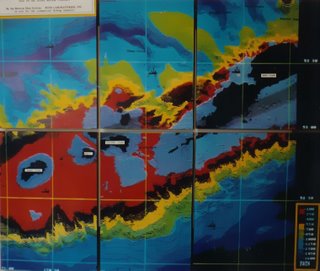 The Government has better charts than these, with the fish stocks pinpointed on them. Pretty hard for the pesky public to see them and put in their two bits on managing those stocks though.

This is the title of a Washington D.C. website report. They get fisheries issues kinda right if they try and this group seems to do that and have good intentions to boot. Although it should really read "billions" of pounds. Reporters like to understate things so it won't look like they are exaggerating right off.

The latest fiasco was in the Bering Sea when the by-catch was reported by the government like this. "The numbers caught us by surprise." Now what does that mean? The trawlers knew they were throwing over millions of pounds of the wrong fish. The observers were there too. Maybe the janitor at NMFS who overhears conversations in the restroom was surprised.

The last figure I have for by-catch of salmon by trawlers in the North Pacific is around 260,000 fish. And here the Oregon trollers are given an extra 12,000 fish to try save their season? The Feds allow the by-catch of a lot of bottom cruising king salmon and they killed off the Klamath River in a water diversion. If that isn't the old one-two punch, I don't know what is. King salmon feed on the bottom down to 100 fathoms, deeper than halibut fishermen go for halibut.

Here's a zinger for you. The Murkowski administration had someone testify before Congress that they wanted the Data Quality Act disqualified from pertinence to the Council process of fishery management of the North Pacific, or any U.S. Excusive Economic Zone. That way they can keep on putting the reports the big trawl companies don't like in the circular file. God forbid they should use quality data to manage the fisheries.

This report by NOAA states that one of the problems is the need for new technology to reduce by-catch. Remember that if the trawlers are turned loose in the Rockfish Pilot Program, they will be taking more halibut, black cod, salmon and other non-targeted species in their dash for Pacific ocean perch than Oregon and Washington probably catches of these species on purpose.

This report even mentions the use of pots/traps for rockfish. Why doesn't the NPFMC consider more "clean" ways of catching the different species. The Russians could have used giant crab boats to harvest their king crab, but they allowed thousands of small boats out there to spread the wealth. Everything in the Gulf of Alaska could be harvested the same way. The economic benefit to Alaska would be enormous and the by-catch of species that belongs to other fishermen would be zip.

Sure a couple of boats with connections wouldn't be able to scoop everything up, including the sea-whip forests where immature benthic organisms live, and go home in record, profitable time. And take a peek at Lee Crockett's testimony before Congress on Federal fisheries management. Talk about a cautionary tale. As he points out, the Councils, like the NPFMC, don't want your average pesky fisherman getting in the way of their plans.