Dear Editor,
I keep seeing editorials touting Binkley in the Juneau paper. This one uses flawed logic in a couple of ways. One, it talks about using worn out terms like "integrity," like these attributes don't mean anything anymore. 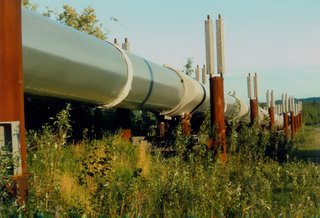 What good has "experience in politics" been in ensuring the integrity of the pipeline?

It's the lack of integrity in government that has gotten Alaska behind the 8 ball so bad, or should I say the oligarch ball.

Two, the writer uses a worn out term to serve his own purpose: "the obvious choice." Binkley may be the obvious choice to the writer, who chooses to ignore integrity, probably because he doesn't have any himself and excuses the lack thereof in others. Lack of integrity is how we get a governor who gives away Alaska's resources just to get re-elected.

Three, the writer chooses to compare Binkley's legislative experience (6 years) to Sarah Palin's mayorial duties. It wasn't mentioned that she was active in oil and gas issues, which also represent dollar figures in the billions, and she represented all the mayors of Alaska to the Outside, while Binkley was being a businessman.

If Binkley supporters are not concerned about integrity, one could justifyably infer that the candidate might have a problematic shortage of the trait which needs to be downplayed. He certainly doesn't want to have audiences on the campaign trail even hear the name Sarah Palin. He does the political thing, stand on the platform the majority of voters are already on; change in Administration. But does he promise a change in direction? Not that I've heard.

While I'm at it, I need to comment on candidate Eric Croft's letter in AlaskaReport. Good letter, from a good heart, but it's not Governorial, sorry. It really just echos the reftain that the Alaska street is already saying. What we have been saying on this website and my blog for a year. It may have worked in the past to co-opt the mood of the majority to get elected, but folks are more sophisticated now and they have information sources at their fingertips that wasn't there before.

It's a new day. Candidates will have to just be real. I'm afraid, (for all the other candidates sake) that Sarah is the only one who shines in this department. Some of the other candidates, like Tony, lay so low that nothing can shine out of the hole they hide their views in. Like it's enough to just let handlers make any statements. Guess what kind of governor that makes. One who lets the handlers make the decisions and appointments.

When you think of the concept "Team Alaska," just ask yourself this coming (August 22) primary, who is a good "fit" to make the team? Who is the best team player? Who is is obviously for Alaskans. Right out there with "Team Alaska" and not doing side deals as a priority, that they can't talk about. When you have nothing to hide, you are free to speak, and it looks to me like Sarah Palin is speaking up the most.

If you want to get a glimpse of the the cavalier way Alaskans have been treated by former (and current) governors, (and legislators by their silence), go to this regulatory watchdog web-site. My article on by-catch, and the Murkowski administration trying to get the Data Quality Act shelved, as regards the North Pacific Council, is featured as their Regulatory Action of the Week.

Protection from this Act in the Reauthorization of the Magnuson-Stevens Fisheries Management and Conservation Act would give Murkowski and Steven's campaign contributors legal cover to use phony studies to justify privatizing the fisheries resources for themselves. It seems incredible that some people would do this to Alaskans, but look at all the other craziness going on in the world. And look at how British Petroleum dummied up the reports on the pipeline and spill response equipment.

In sum, this election cycle in Alaska is really a referendum on integrity in government. Legislators with integrity might find smooth sailing as well. An economist in the current administration was explaining to me that if the rank and file fishermen and the communities want more economic multiplying going on, they just need to elect legislators who will do it. He says they have the power to do whatever is needed. That may be boiler-plate language to get the Guv. off the hook at present. Either that or it's the Texas two-step that both the Guv and the legislature use to point fingers at each other. That's how you get fouled pipelines that cost the state $6.5 million a day in lost revenues. Just peachy.