John,
Maybe you can use this clip in an article, anonymously. He fishes for a major so can't have his name on it... and it doesn't fit with my pieces planned, but might be a great take off point for your regular stream of articles. Obviously he reads my stuff, and we email occasionally, but he is scared the processors will even find out he knows me. Typical. Best,
Stephen 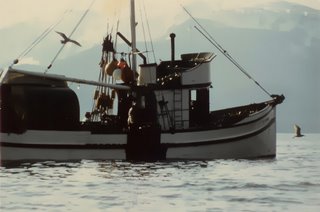 Before halibut IFQs, these smaller halibut boats were common all over Alaska. This one hailed from Kake.

"FYI, my buddy's boat recently made a halibut delivery to Puget Sound and got about $1.25 a pound more on the fish ticket for their load. After paying for fuel and ice, it worked out to around $1 more a pound than Dutch Harbor. Whatever happened to the 30 or 40 cent difference?

Is that the high premium that an outside company must pay to compete against the Alaska monopolists? And a direct result of those new crab monopolies? Our boat is just like everyone else's. If we don't give our halibut and black cod to the processor, we don't have other markets. If we delivered south, we'd lose our whole business. I feel robbed after finding out this is the new difference, after high fuel costs are covered.

Surely the antitrust people should use this as a reason to investigate more. With big companies having people inside the state agencies, they find out if we do a (private)direct marketing deal too. Alaska is just too closeknit. Maybe you guys can let the Department of Justice know that halibut premium is one way to measure how bad things are with the foreign processors, to show it exists.

Don't they need a way to measure how much the power of PQs gives these guys? These fishermen increased the total net value by about $45,000 for that one halibut load! A lot more fish will leave Alaska if people know this is the way to go. We can't get any direct marketing established because the big processors up there have a corner on it and won't do any custom work. Juneau will never get the ice and custom processing problems fixed. Thanks. Bye."

This is typical of what I get in my e-mail too. But it's also a classic argument for the Regional Seafood Development Associations. Basically, the fishermen in a region of Alaska pay one percent (or more if they want to move faster) to have someone work full bore to get that segment of the industry into the market. Right now they aren't in the market. The processors are. And that's the way they like it.

Would a percent or two add up to 45 grand on a load? Not hardly. And if they ever think their one percent is going down the drain, they just fire the Director. It's business, not government. And the RSDAs are their business. In fact, performance is so critical, the Director's pay needs to be tied directly to it. I'd bet if the wives knew their husbands were letting their fierce independence (read that; hard heads) stand in the way of getting what their fish is worth, they'd be furious.

And by the way, I wonder what happened to the public ice maker that was in Juneau when I ran a plant there. That was in 1991. We had to get it running ourselves since nobody else around could. Good thing I had Rick Carr on my team. If the University wasn't hogging the best spot on the waterfront, right by the icemaker and hoists, a sweet public cold storage could be built. I saw reference to a 1976 working waterfront Act today. Wonder if it applies.

Bayfront plans get coastal panel's OK San Diego Union Tribune - United States... restriction was unacceptable because it conflicted with the 1976 Coastal Act, which calls for preserving and enhancing commercial fishing facilities along the ..."