Mark Stopha is starting a career in fish processing the new fashioned way; stepping off the boat to focus on production and marketing in a lean, collaborative way. He may be just in time. Powerful forces want to stop people like him from getting a toehold in the processing game through a clever play on the word "rationalization." 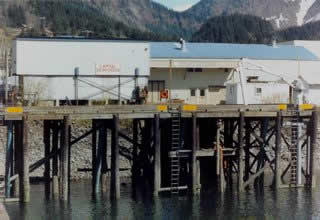 The ice machine and ice delivery system and hoist I used to buy fish in Juneau in 1991. If the University would move out of the building behind, a lot of fishermen could do some great business. You'd have to pass a law to pry them out though.

"Rationalization" always needs quotation marks around it because the word is really being hijacked for use in the current fisheries management context that is not rational at all. It is being used nowadays to cover a range of dirty tricks to whittle down the numbers of fishermen and at the same time, make it unlawful for the remaining fishermen to market their catches themselves. This is the intent and effect of "rationalization," when you get through all the spin. It happened in the Bering Sea and now it is posed to happen for bottom-fish in the Gulf of Alaska in January 2007.

Think about how big the Gulf of Alaska is for a second. It starts at the U.S. - Canada boundary south of Ketchikan and runs out to the Aleutian Islands. A 200 mile wide strip ocean and all of the fertile continental shelf. "Rationalization" is the flip side of anit-trust. Alaska governors and Congressmen are abdicating free enterprise for guys like Mark Stopha to the big campaign contributors who want to process and market all the fish themselves. I'm not making this up. It IS a cancer that is spreading from parts almost unknown, into more populated areas and could spread all over the coasts of the U.S. via the new version of the Magnuson-Stevens Fishery Management and Conservation Act that is being worked on right now.

I only wanted to talk about what a great thing Mark is doing, but it just takes a second to remember that the Pacific Seafood Processors Association is hell-bent on nipping this kind of movement in the bud. That makes me mad as it should any red-blooded American. Give me a break, wars are fought for our freedoms, and politicians should be protecting them at home, while we divert our attention to our kids fighting on foreign soil. Not to sell our freedom to the highest bidder in an election cycle when we aren't looking.

My kid has been fighting overseas, like a lot of parents' kids, and he's going back to do it again, so while he's away, his right to start a fish processing business is on my watch. Not that he wants to go into seafood processing and marketing, but he's one of four skookum boys of mine that are fifth generation Alaskans that grew up around the fishing business. One of them MIGHT want to do what Mark is doing, just like you or I might.

Check out Mark's ad on AlaskaReport's home page. He's offering 50 cents a pound for pinks, where the big campaign contributors are only offering 10 cents a pound. Isn't there something wrong with this picture? This other mom and pop fisher/processor in Petersburg got $4.25 a pound for their sockeye. And fishermen wondered if the Regional Seafood Marketing Associations could get them more money for their fish! What if some fishermen developed a way to automatically pressure bleed their machine cleaned seine fish on board. Not much of a stretch. Mark would be looking for a hundred people to help him and a new plant in Juneau. Cool, huh. In a pink year like this in Southeast Alaska it would be right handy for making boat payments.

One of the problems Alaska has been having with traditional processors is that it hasn't been politically correct to paint them as anything but benefactors. In the early 1900s the cannery superintendent was like a land baron in the bay the cannery was in. He was the law of the land for everyone in the area. He fed everyone, gave them jobs, built them shacks and bunkhouses and provided boats and nets. He usually lived separately in a nice big "superintendent's house."

They had great influence on whether a town would spring up or not. Some canning companies didn't want a town to spring up. Whether they still do is up in the air it seems. Actions speak louder than words in this department. You be the judge. But on a positive note, they are doing a bang-up job of doing their part to consolidate all the wealth.

The other thing I don't like about this industry sector (60% Seattle owned and 20% Japanese on a labor basis), in it's current form, is their tendency to say, "you don lak da price, I break yo thumbs." Blackballing. These companies send representatives to all the fisheries meetings to watch who is saying what. Of course other of their representatives are running the meetings. The funny thing is, I don't see any gubernatorial candidate, except for Sarah Palin, speaking up specifically against this manipulation of Alaskans, and the detrimental effect it has on Alaska's economy. And of course State employees are afraid to speak up too. You look cross-eyed in the elevator of the State Office Building and you could find a pink slip on your desk the next day.