So you want to fly your fish somewhere

To fly your fish out of Alaska, you have to apply to be a "known shipper." That process takes four to six weeks, going through the Transportation Security Administration. That shouldn't be a problem unless you use a Damascus home address. You can print off your application here. 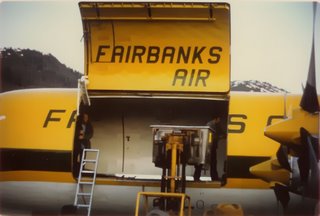 I guess I've been involved with a lot of different aircraft used to fly fish around in Alaska. This one made the trip from Kotzebue to Petersburg with a load of chums. Petersburg, AK to Medford, OR is almost exactly the same distance.

Follow the instructions on the Alaska Airlines PDF document. Most fishermen in Alaska have a P.O. Box instead of a physical address. That's due to the fact that there are no letter carriers in most coastal communities. So use your drivers license with the Box number address. On the surface it looks like you have to have your physical address on your bills. Alaska Airlines knows fishermen don't live in Post Office boxes. There is a street address in city hall for all the houses, so you might have to go there to get your street address for the sake of the TSA though.

This all takes determination, that's a fact. But the rewards are worth it if you don't blink. And don't let the local processor buffalo you like they did the cod fishermen we were helping in getting their cod to Korea once. You could sue the pants off a cannery that threatened to withold heating oil for your house. Then you have baggage handlers at the airports who think 50 lb wetlock boxes of fish are too heavy and will leave them in a cart for three days so the shipper gets the message not to send any more fish to that airport. That was Phoenix, and only one handler I talked to, so this isn't the rule I'm sure. And it wasn't Alaska Airlines.

One fisherman told me recently he just doesn't trust the system. Another, Shawn Dochtermann of Kodiak, said he always freezes his fish first to absorb all the hiccups in the system. The irony is that the major processors reserve the limited space available on the flights a lot of the time, so a fisherman can't send part of his load to market himself for the premium price. The fresh fish the major is shipping was the fisherman's property earlier in the day and now it's being used against him on the afternoon flight.

Market control by fishermen means also not taking this kind of abuse. Read that - start a Regional Seafood Development Association. Not to mention stopping the fisheries-political abuse as well.

I got on this vein because Shawn stopped in to visit me recently and couldn't stand the thought of the old "fish blogger" getting married this fall and having Kentucky Fried Chicken at the wedding. So he said he'll look for contributors, when he gets back to Kodiak, to supply fish for the festivities. I just hope he's a "known shipper." For you batchelorettes, I can confirm that he is a real "keeper."

This will be the first time I've been involved in a fish shipment in a long time, so I'm learning too. I'll pass on anything useful. You can buy a GPS tracker to put in the top box of a Igloo load. (It won't work if it gets burried in a pile of boxes.) Then have the consignee send it back Gold Streak on A.A. At this point I can't recommend a transfer of your fish from A.A. to another carrier, so make sure your consignee is in a town Alaska Air or a subsidiary like Horizon flies into. Check out the shippers credit application on www.AlaskaCargo.com too.

And you know that government agencies can't tell you anything because of liability issues. And the Airlines spin the risks. I asked if the cargo call center would put in writing what they were telling me today. Dead silence. I had to laugh and say I was just kidding. A station agent for a commuter airline here in Medford confirmed the risks of transfering to another carrier. And here's where to go for Air Cargo frequently asked questions.

I was going to end with a "Mission Impossible" slogan, but rather prefer that old saying "Don't despise the day of small beginnings." If you've voiced your desire to fly fish out of Alaska to two people, you've already bumped into at least one naysayer. Ignore them. But don't forget to fax your Air Bill to the buyer to get paid before the plane leaves.