I won't lower myself to refute the fuzzy logic that was trying to promote John Binkley in the Juneau Empire recently. I wonder why a brother and sister would write these articles, and from a fish processing family too. Surely they know Sarah Palin is more resource oriented, having been a commercial fisherman and heavily involved in oil and gas issues. 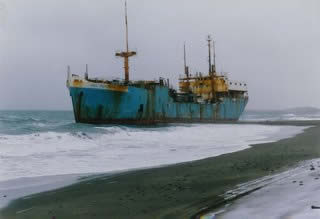 But maybe that's the key phrase: fish processing. There is no conjecture regarding the fish processing sector's support of anyone that will keep the resource flowing into their hands with the minimum of siphoning by those pesky fishermen and communities. Remember "processor quota shares" and "processor linkages" the recent "highly experienced" governors support? You got to get people in government that you can manipulate to keep this cancer growing. And now, the best way is to get someone from the middle of the taiga with no clue about the fishing business, since all that experience has caused the incumbent's EEG to flat-line.

The families I've mentioned so far, with the exception of Sarah's, have just stepped into businesses left to them by others. These people aren't representative of Alaskans, especially when they spin the truth. I was telling someone the other day how fishermen learn to be gut honest. They can't just spin a weather report and go charging off. That's the surest way to get caught in a blow.

Fuzzy logic may work on a lot of people in Juneau, but doesn't hold water with the fleet. I'm not saying the whole fleet is operating with every altruistic cylinder firing either. A lot of them want to lock in their average catch in the form of a title, so when they want to slow down or quit fishing, they can garner an enormous golden parachute. This just drains the harvesting sector of the capital it needs to upgrade the equipment and break into the market. It's worked out great for the processors who covet the exclusive right to market fish.

Bottom line? processors support the fuzzy logic candidates with no fish biz experience. The biggest leap forward Alaskans made was with a governor right out of Bristol Bay, Sarah's old stomping grounds. It was in the form of the Permanent Fund, Alaska's savings account, created by Governor Jay Hammond. And the poor guy has to constantly fight to protect it from being pilfered by the "experienced" governors. I maintain that the more experience you have in state government, the more insensitive to rank and file voter's needs you get. Hence term limits.

If Sarah's detractors had a clue, they would know that academia has shifted to management techniques that rely on input from many sources. You want a king, go to Saudia Arabia. Just don't get caught stealing anything or you'll have to learn to write with your toes.

Voters have a choice this Tuesday of electing a Republican candidate that wants to keep as much of the value of Alaska's resources in the state, or dirty tricks as usual. I wrote this in an e-mail recently:

"When you step back from all the rhetoric and take in the whole picture, there is this lone rainbow, and it is sitting right over Sarah. That's what I see. I haven't wanted to be too gushy about Sarah's campaign for the sake of all the readers, but the facts make me look like a real cheerleader I'm afraid. And it's easy when you see someone else get on the page you're on."

"Sarah has stepped onto the stage we were all sitting in front of for years. We were waiting for someone to show up on our stage, but the stage across the hall was the only one getting actors to show up. There were way more people in our audience than the audience across the hall, and to top it off we were forced to watch their play."