Getting this ship up to the Northeast to help immensely in managing the New England fisheries that have been fraught with overfishing. Not to mention the enforcement aspects. Meanwhile the fishermen and politicians exert tremendous pressure to scrape the bottom 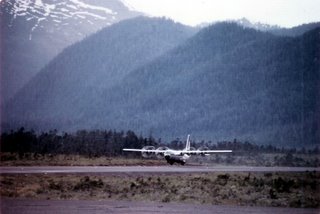 This Herc was "tendering" salmon when I took this photo. To make fisheries management work, it will take a paradigm shift for a lot of people to look at whole different ways of doing things.

Northeast to help with stock assessments will help immensely in managing the New England fisheries that have been fraught with overfishing. Not to mention the enforcement aspects. Meanwhile the fishermen and politicians exert tremendous pressure to scrape the bottom.

This Herc was "tendering" salmon when I took this photo. To make fisheries management work, it will take a paradigm shift for a lot of people to look at whole different ways of doing things.

The bottom of the barrel and the bottom of the ocean are one and the same in this case. They seem to pooh-pooh what all this bottom trawling does to the ecosystem of the continental shelf to try keep the ball rolling for everyone. In Alaska, the Federal managers of the fisheries were forced by conservationists to protect the coral forests, a practice that one national fisheries editor scoffs at. The juveniles of many species live in these forests down on the bottom to keep from getting eaten prematurely. East Coasters can scoff at Alaskans wanting to protect fragile benthic ecosystems, because they certainly wiped out any such ecosystems they had a long time ago.

Under the watchful eye of Senator Ted Stevens and Alaska's Governor Frank Murkowski, the sea-whip forests that funcion the same way in the Gulf of Alaska, are slated to go the way of a clear cut forest. They are doing their best to make sure the large fishing corporations can deploy the most efficient equipment for the new harvesting and processing regime they have cooked up. Mega trawlers and "canyon buster" bottom trawls. And keep the little boys in the front yard and the fence locked.

I won't keep bashing Frank, because he's been voted out in the recent Alaska primary election. I was a holdout supporter of his for a long time, (at least not a detractor) since he ushered in the Regional Seafood Development Associations(RSDAs). One last (maybe) insight into how he makes appointments, favors big business, and fund(ed) his tenure in government can be seen in a recent Asia Sentinel article. It said: "Lee invested some of the money abroad for diplomatic purposes, including a US$120-million seafood factory in Alaska, in a goodwill gesture to then Senator Frank Murkowski. The factory later closed."

I've been to that fish processing plant in Anchorage. It never did run really, and it only cost maybe five million bucks to build. Where did the other $115 million go? Well, maybe this Lee guy just had a great time in Las Vegas. This was during Frank Murkowski's stint as U.S. Senator from Alaska.

On to more productive things. Business Week magazine did a story on individual transferable quotas recently. Considering that they look through a key-hole at the industry in doing an article, they didn't do half bad. They have to push and pull ideas around to fit a coffee break in Kansas though so you can't hang your hat on what they say.

A comment from a reader of theirs caught my eye. He said: "In the final analysis, poor state of fisheries management in many developing countries is mainly a social problem revealing lack of choices amongst coastal fishing communities. To fix their fisheries they have to fix their livelihood problems of lack of sufficient opportunities for employment and income in coastal communities."

Now that sounds like deja vu all over again to me. When I was the Fisheries Infrastructure Development Specialist for the State of Alaska, I did a year and a half of research that led do that same conclusion. Although I wasted a lot of time in satisfying Department whims. But in working with 26 coastal communities from Ketchikan to the Pribilof Islands, a common theme was that there was enough port space, but there wasn't enough shore jobs. How do you make more shore jobs that fit into the lifestyle of these communities? So, I wrote a White Paper on the "association" concept for Alaska, based on successful models like Florida Citrus Mutual and Blue Diamond Almonds.

It's simple. Just join the modern world. Do what every other producer group in the world is doing; forming producer "associations." (If you went to the Business Week article, the subtitle included: "A market-based approach could fill nets again.") That doesn't mean the gillnetters form an association to stick it to the seiners. It means they all join the same product development and marketing innovation group. And Frank and a lot of folks in Juneau finally saw that, and hence your Alaskan RSDAs were born.

Take a look at what those inveterate fish mongers, the Japanese have to say about fisheries management and production past the first stage. Mitsuri Kitamura, manager of Russia's operations section for Tokyo-based Maruha Corporation, revealed that, "If Russia wants to manage its fish resources effectively, it should take further steps to organize its own processing."

The fly in the ointment has been the big multi-national and Seattle seafood companies who don't want anybody else in the secondary processing game any more than they wanted to lose their fish traps at statehood. The fisheries management realm has been dominated by these folks to keep fishermen from realizing their dreams. Fishermen can't even insulate and refrigerate their fish holds because the big shot plant owner had to buy a $47 million dollar jet to fly around in. All the hundreds of salmon seiners in Alaska that went out of business in the last six years, because they couldn't chill their fish, could still be fishing if that one plane could have been used as collateral or higher fish prices. And there are more of these jets in the Alaska seafood industry.

But part of keeping the fishermen from forming ranks and joining the marketing game is flying politicians around in a fancy jet. Little do these couple of jet jockeys know that if they worked with the fishermen now, they wouldn't loose out completely later by wanting it all. I think the old processing family, the Brindels, saw the handwriting on the wall and sold out before they had to move over and make room for FISHERMEN.

I'll put it plainly for those that can and/or want to do something about the fisheries management situation: THE PIPES ARE CORRODED AND NEED REPLACING. The writer of the BW article got it wrong in the end. To resign yourself to ITQs just signs the death knell for the communities and future generations of fishermen. Privatization bleeds the region of the capital it needs to keep going. In future articles I'll start including ideas from a lot of smart folks that would replace the old clogged pipes, the current Council system and other lesser institutions of haggling and feet dragging.