We are well on our way to seeing a beautiful sunset for the Stevens (the two of 'em) /Murkowski cartel in Alaska. Take a look around real quick and make a mental note of who their friends were. Once they are gone, we sure don't want similarly feathered birds (no pun about jail-birds intended) to just fill in the holes in government and other industry groups. 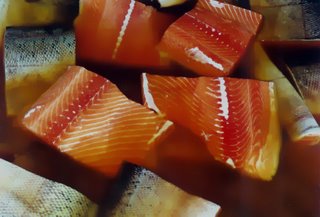 Keeping an eye on depeloping new fish product forms and ways to market them, with attendent higher profits, will help visualize new ways to get there.

Now take that last word: industry. I knew a processor who was shaken down by the other processors for $32,000 in annual dues to their "influencing group," the Pacific Seafood Processors Association. Under the aforementioned cartel, these people have been able to put their lobbyist on the North Pacific Fisheries Management Council twice. And not just as members, but as Chairmen. That's a lot of years the offshore fisheries in Alaska have been run by special interests.

I'm not ever going to be able to paint the whole picture, and the solutions, in just one of these posts. Keeping up here is the best thing going. If I knew where else to steer you, I would. We are getting the picture in pieces all the time. I profusely thank contributors like the one below. I takes time to do this. Some of us just stopped our lives to do this because it needed doing. It's going to take more time to sift ideas like the Grange system or the Guild system, and others, for nuggets that we can use to manage our fisheries for the maximum benefit to the public. Voters have finally gotten hip to the fact that our leaders were managing our fisheries for the maximum benefit of themselves and their friends. Hence this letter of warning about Tony Knowles and friends.

I had a talk yesterday with a long-time Alaskan who is trying to help educate folks in supply-chain matters(which the "establishment" doesn't like). She had gone to Ireland in a delegation and they showed her how the Government is on the bottom of their fisheries organizational chart. We have a basic way to do that now: the RSDAs. The trick now is to educate fishermen as to the potential, which this Administration won't do, and clear out the opposition to letting the 99%, the fishermen and communities(the voters), direct the industry.

"John, as someone who has been in the Alaska Fish business for 30+ years, I was witness to an unbelievable shift away from fishermen having a majority input into the NPFMC and State of Alaska fishing industry; guiding the process to benefit the fishermen and small communities of Alaska.

Now the lobbyist/lawyers are in complete control of the process, from the top on down. Huge changes now can and do happen overnight, without warning. More shocking is the obvious willingness by the Alaskan US Senate and US House Delegation to sneak in under the cover of darkness (cigar filled rooms in Washington, DC) and actively help one company over another, or worse, actually changing the basic core principles of free enterprise.

I was ready to give up on Alaska. Now for the first time in my life I hear people talking seriously about who might run against Ted, and more incredibly, about which Republican candidate to run against Ted. These are not the 20yr old college kids, but mainstream blue collar Alaskans, which is why Trident Seafoods' Chuck Bundrant is in a panic. His efforts to back Frank the Bank by supporting dirty tricks vis-a-vis the ironically named Unitied Fishermen of Alaska (UFA), and Bobby Thorstenson, are now widely known.

Bundrant(Trident Seafoods President) has now come out of the closet by sending Terry Gardiner, (former president of the once-independant Norquest Seafoods) to be policy adviser to Tony Knowles. The public will soon find out that all the seafood processing giants (mainly Japanese and Trident ) are going to back Tony Knowles - they have to. This group benefitts $500 million a year only through Ted's and Don's largess and protection.

Terry Gardiner, remember, was a big proponent of processor shares - he repeatedly testified at numerous NPFMC meetings that Norquest "needed them to survive against the likes of Trident" - yet he sold out to Trident before the shares were even issued. (A not-too-subtle payback for Gardiner, along with a new high paying job.) This then begs the most interesting question: what is the Don Young and Ted Stevens' plan, since they are the beneficiaries of the millions of dollars that flow from these companies PACs, and groups they also own like Pacific Seafood Processors Assn.(PSPA)?

Will Republicans Don and Ted really support viable Republican candidate Sarah Palin? Or will they try to undermine her, so Tony would win and close ranks with the groups that have poured money their way for 20 years? Likewise these groups have received untold riches from the Young and Stevens manipulations of the laws of this country.

Reportedly, Chuck and Ted are very close and spend time together at events like the annual August retreat at El Capitan Lodge, a ($1000/day) "benefit" for the Ted Stevens Foundation, (whatever that is), the Boston Seafood Shows, etc, etc. Chuck has also shown his affection for Ben Stevens, making sure the various Seafood entitys send their required monthly consulting checks to him without fail, while Ben makes sure the Federal and State money flows to the giants at the expense of the citizens of the State of Alaska. Perhaps Chuck will start raising funds for his legal defense, or maybe Ben already had that as a provision of his "consulting" contract?

No stranger to the world of corporate high life, Don Young has enjoyed the use of American Seafood's private corporate jet, and might not want to see this company, that was once disparagingly called the "Microsoft" of the fishing industry by Ted, (see AFA) have to give up that jet. Or worse, have to give up his yearly flight to Desert Canyon (in Orondo, Washington) from Washington D.C. for an Al Chaffee-organized golf tourament, at which his wife has reportedly been extraordinarily lucky, winning a very expensive diamond jewelry "raffle prize" at least 2 years in a row during 2001- 2002. (I wonder if the FBI might be looking at that too.) It is common knowledge that Al Chaffee has also been very helpful to some of Don's relatives in Alaska in real estate deals - see Bridge to Nowhere. (FBI ?)

If Tony does not win this time, I think it is clear that he will be running hard for Ted's seat, with this just the start of what is likely to be at least a couple of years of FBI poking around at Ben's (and presumeably, by association, Ted's) business, no mater what he will say to spin this. It is clearly not in Don and Ted's interest to have Tony free to run against them. Tony has already shown he will play ball, by his past help as a Democratic Governor, in securing Ted's son a seat in the Alaska senate instead of blocking it, as a normal opposing party would have done.

Along with helping Ben, we also know that Tony helped push an (even at that time) very controversial component (processor Quota shares) of Crab Ratz into law.

What we do not know is, What Did He Get From Ted For His Help?

But they do know that if the Alaskan voting public gets wind that they are anti-Palin, and traitors to the Republican party, that is even a bigger problem. Outside-based seafood and oil companies can create large PACs, but they have not yet figured out how to create voters.

Last but not least, is the fact that so many (20 yrs worth) dirty secrets are out there. If a new Governor started to unwind just the most grievous of these, along with the most recently-passed anti-competitive laws, we might find even bigger skeletons, ones that VIPs counted on staying hidden forever. Interesting times we live in."

Until the Election for Governor is over in November it's going to be hard to concentrate on solutions. We have the RSDA system going for inshore and small boat fisheries, but the North Pacific Council still needs guidance on the larger fisheries. We have to help them or we'll end up with the processors' and big boat Seattle fleet solution: "just keep deeding us the fish." The Magnuson-Stevens 200 mile limit law is still being tinkered with in D.C. and is not cast in concrete yet, and the NPFMC marches on with it's phalanx of Stevens/Young/Murkowski collaborators.

On a final note, the Bush Administration was smart to get the FBI going on all the racketeering in Alaska. But the job is not over yet, and they might do well, in the fall competition for control of the House, to finish the clean-up job quickly. They need to make a major statement for the benefit of the voters' confidence in the Republican Party. To at least have one thing they can point to that says to the voters, "we are with you." (Labor Day is an appropriate day to write this, I guess.) The National Republicans might have to say, "we gotta cull that (cash)cow in Alaska, otherwise we're gonna lose the herd."