Cleaning up the house

Got a little straightening up to do before starting a new format Monday. I think it will be as useful as before, at least it should be more entertaining. 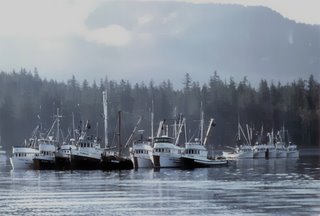 Contrary to popular belief, rank and file fishermen can work together. (S.E. seiners will recognize this shot as being in Seymour Canal waiting for the roe herring fishery to start in about 1976)

We'll just have to see. We also have a major retraction from the last article I did, using a contributor's e-mail. He wrote today with this to say:

"On Sept 4th I sent you important info. on seafood companies and Sarah Palin. Most of this is 100% correct and will repeat the important issues after I point out my error on blending Terry Gardiner and John Garner (where I said he was"sent") by Chuck Bundrant to help Tony.

I called a couple friends before sending this whole email out to you and apparently because both last names sound similar on a bad cell phone, this statement is not a fact.

This why there was a little confusion: John Garner was a principal in the fish company, Norquest. He moved over to become executive director of North Pacific Crab Assn, and after Norquest was gobbled up by Trident, he returned to head up Trident's division under the Norquest label. Terry did sell out, almost the last independent Seafood company left, so he did get the benefit of cashing out after jamming thru this Crab Ratz without having to worry about it effects.

My info. about Chuck being in a panic is absolutely true, and if anyone knows Chuck, if you are working for him like John Garner, he would not have been a "policy adviser" without being ordered to. Chuck is famous for having Bart Eaton sleeping on a cot in his office, etc.

I am very sorry that I thought Terry was still on Trident's payroll, please pass that on if you can."

I have to say I was a little surprised that Terry was back in the fire, having launched out on the good life of volunteering like myself. Not that this is exactly the good life for me considering that when you do what I, and fellow columnists on AlaskaReport do, you see some pretty strange things. Like attack dogs on your front porch and gunshots when you pick up the phone. As I've said before, it isn't worth doing if you can't make it all as accurate as possible. It would just be a lot simpler if a whole bunch of people would come clean, but you know that'll never happen.

On a lighter note, and to make today kind of a punctuation mark in my blogging, I want to let other folks read what you have sent to me that probably keeps me going. Going in the hole too. LOL

"John-
As a long summer on the water winds down, I'd like to convey to you the heartfelt thanks so many of us feel for your keeping the independent fishermen's torch burning while we were gone. Speaking out with your natural style and understanding of fishing and Alaskan politics has been of incalculable value and a great comfort to those of us who know, in a general way, what's going on, but don't have the opportunity to be heard or get the latest information.

And let's face it, If you and Stephen Taufen and the Alaskan Report weren't speaking up, who would be, and where would we be right now? Only a handful of you are speaking the truth for fishermen, and yet the positive effect you've had creating choices for new directions is amazing.

It was through your writing that I first learned about Sarah Palin's gubernatorial campaign, and I have to tell you, at first I thought you'd gone out on an impossibly slim branch endorsing her. It just didn't seem realistic to expect a nearly unprecedented unseating of the incumbent ex-Senator/Governor with all his big-bucks backing, but we did it. The rest of us can take pride in saying "we", but you and a few others should be especially proud that you accomplished this yourselves through shear optimism and a commitment to the truth. Thanks for speaking for us and showing us what's possible, John."

"Hi John,
Here's something I got from the contact form on the website. I get compliments to you all the time. Dennis"

"Right ON! That is a most articulate description of the fish politics in AK. I am so grateful that you are shedding light on the abuses of the Stevens family and their connections to Chuck and the broader industry. Keep up the great work you are doing, it is causing quite a buzz in the industry."

"Great Columns, John. After having been slid out of the only commercial fishery I ever cared about, I am surviving in the tug boat industry where I always have an eye out for a bag and flag. Interesting that now Big Bob is the old guard replacing the former, like APA, New England and the like. I will be checking into Alaska Report occasionally so don't change the side you have your stripe on.

"Dear Mr. Enge:
The Center for Regulatory Effectiveness, http://www.thecre.com/ discussed your recent commentary article regarding bycatch as the lead RegWeek article on our website (with a link back to AlaskaReport.com). I noted that the testimony regarding the Data Quality Act (DQA) was from July 2005 with additional testimony on marine conservation from May 2006. I was wondering if there are any more recent developments of which you were aware. CRE was the leading proponent of the DQA.

"John, That was a quick and sweet article! Saved me time and you used some very crafty words... and it got the PDF posted and available, too. Great!"

"I assume your new life requires a mazel tov for a new marriage. I am tied down in Mendocino then but if you are down this way, give a call.

I really enjoyed your blog pieces. I have become rather Republican after 911 on a lot of issues. The CBCs in Juneau really crack me up. Keep up the good work John. In the esteem of those who know you, it has already reaped you a fortune."

"Your latest articles on AR are fantastic!"

"John,
Congratulations on your numbers. I'm not surprised, you're BIG in Seattle. I talk about your articles frequently with my friends. We all like the convenience, detail and versatility of your reporting. I'll bet you're the homepage for hundreds of Seattle and Alaska fishermen. Can you imagine what will happen when you get on Google? Stand by for your IPO, young man! Especially when you become an online Bering Sea-GOA multi-species brokerage!
Regards,

P.S. I asked for your mailing address so I could send you a couple of Alaska short stories ( one at a time) that I've written for your critical, no bullshit, call-em-like-you-see-em criticism. I don't want to waste much time writing fiction if I suck at it. So be candid and pull no punches please."