Bad boy, bad boy, wa'cha gonna do when they come for you?

John,
I thought I might share some interesting recent newspaper stories that might explain some of the extreme panic that I understand is currently happening in more offices than you would think. First is from McClatchy News: 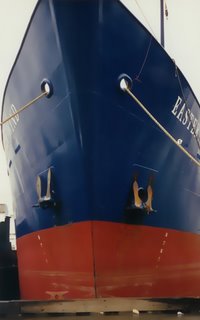 If you are in the "inner circle" of fishermen in the North Pacific, this is what your boat would look like. If not, you are lucky to have a 58 footer that isn't wood.

Vernon L. Jackson, the man that bribed Rep.William Jefferson (remember the $100,000 cash in the freezer) has already been sentenced to 7 years 3 months in prison, this is extraordinary considering Rep. Jefferson Has Not Yet Been Charged With a Crime...

The U.S. District Judge T.S. Ellis said, "Public corruption is the worst kind of a virulent and malignant cancer" and "The rule of law only makes sense if our public officials are not corrupt". In sentencing Jackson, who could have received nine years under federal sentencing guidelines, Ellis acknowledged Jackson's role as a church person and community leader."You are a decent person, but you made a decision to bribe a public official," Ellis said.

The number of people in the Seafood Companies and their lobbying groups that have been channeling very large amounts of money (millions) to Ben Stevens and his partner Tervor Mcabe is more than a dozen. The lists of legally questionable, and without a doubt morally reprehensible, actions of Ben and former aides of Ted Stevens, branch out in every direction.

From the government Ted-directed bail-out in the Seward Sealife scandal, the allocation of Pollock quota in Adak, to Ted creating the Alaska Fisheries Marketing Board, there reeks the stench of corruption. As if this was not enough, Ted then earmarked a huge (40 million dollars) appropriation from taxpayers, putting his son Ben and and his former staffer Trevor in charge, to give away money to Seafood Companies of their choosing.. As crazy as this sounds, Ben and Trevor gave free "grants" to these multi-national conglomerates so these same companies could turn right around and give consulting fees back to both these guys directly.

I am not a lawyer, but I believe that meets the definition of money laundering, or at least it does for those who are not elected officials in Alaska. Funny thing was, no one was complaining about the original Alaska Seafood Marketing Institute doing a bad job. It has been in business for years promoting seafood. I didn't hear whether the Alaska Fisheries Development Foundation was doing poorly either. If there was a serious issue with these 2 long-time seafood promo groups, why not fix them? Oh, I forgot, Ben and Trevor didn't control them.

There was nothing wrong with them. Why Ted would, on his own, create and fund a completely new Agency/ Board to duplicate ASMI-AFDF is simple: by putting his son and Trevor in charge of giving away millions every year, they would be set for life both in the fees they get back, and in the power they would have over these large companies.

For example, Trident can get free money to go to shows or develop a new product, but some new guy is ignored (or worse) and has to compete with these giants. If he did have a new and unique idea to bring to AFMB, AFMB was only a phone call away with that idea to their real partners, onced they denied funding to him and he was out the door. And although ASMI is listed in the phone book, try and find AFMB's phone #. I guess Icicle and Trident have a private hot line to Ben and Trevor.

This is not new information, but since the FBI has finally showed up, they seem to be focused on the Veco/pipeline corruption scandal, which is easy and fairly classic. Veco hires Ted's son, and Ted hires the head of Veco's son. Now money starts flowing from Veco first -consulting fees, campaign donations, etc, to get the pump primed, then when very favorable tax breaks, grants, etc start to flow, it all comes full circle.

Over the years Ted has been the target of people trying to give him, or should I say the "Ted Stevens Foundation" or his PAC, "Northern Lights", large sums of money. And every summer one of these events is held at the El Capitan lodge in Southeast Alaska. All the heavyweights that have pending business in front of one of Ted's many Senate Committees show up in their jets (again not new info.)

But what is really interesting is the lodge's web site where guests can show their off their daily catches. It used to show Ted's catch of the day along with his special guests, like Veco's Allen, Chuck Bundrant, John Iani, and Mr. Roberts of Comcast. Since the news of FBI raids, I went to look and these pictures are now gone, why the coverup?

Again I have written before about this, but a lot of recent news has been about the basic question, when is a large sum of money given to a relative of a Senator or his son's business partner NOT A BRIBE? In Alaska, because of the strange lack of rules or lack of interest in the rules by the Alaska Public Offices Commission, apparently the answer is NEVER. Even repeated volations of unreported income nets only a $150 fine. Hopefully this too has been noticed by the FBI, and asks the question - who chooses the APOC members?

It would be too ironic if Ben Stevens, as head of the Senate Ethics Committee, is in charge of choosing them. How about Republican party Chairman Randy Ruedrich sending out emails to his politicians saying "if you have been contacted by FBI you need to call me". Does that not sound like someone making sure everyone has the same story? Innocent people do not need to compare stories to get them straight before talking to law enforcement. Maybe the head of the Senate Ethics Committee Ben Stevens helps them get the right story.

This is why the second, recent news article in the Wall Street Journal also caught my eye. The FBI is now investigating Tom Delay's relatives, including his wife, for receiving hundreds of thousands of dollars without "earning it". One firm paid her over $144,000 just to make a list of her husband's favorite charities.

Wouldn't it be funny if the Ted Stevens Foundation was on it? My guess is, the people in Alaska that are in the center of these scandals are burning documents, throwing away computers, losing call records, and booking long vacations in Mexico. These 2 articles seem to show that the people who did the bribing might be doing hard time before anyone else, and the FBI might be harder to fool than some people are now praying. Let it be so.