The frying pan or the fire: Sen. Stevens or Rep. Pombo

When Sen. Stevens of Alaska said he was throwing out "net neutrality," the Internet turned blue with people all over the world commenting on Alaskan's choice of a Congressional representative. As fair as that attack on Alaska's cherished Senator may be, one could also say the same about the folks who elected Sen. Richard Pombo of California. 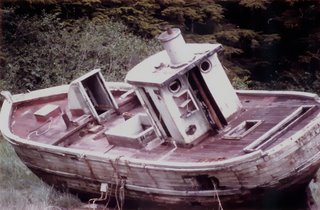 Harold Lee highlined for halibut with the "Vesta" out of Petersburg, AK in the early 1900s. Notice the troll pit at the stern. It beam-trawled for shrimp in it's last days for Dave Ohmer.

Pombo is the son of a successful realtor, who capitalized on his father's name to launch into politics, having not been good at anything else apparently. Now he appoints himself as "savior of the world's seas," like he knows anything about being a sailor? And mucks that up good too, as arbiter of a bill to reauthorize the "200 mile limit law." Thank goodness some reason remains in Washington D.C. and he couldn't get support to advance the bill on the fast track to wreck the free enterprise system in the fishing business, and to the wanton waste of billions of dollars worth of fish a year. (Forget all the hype and spin you hear about the good management of the North Pacific. The bottom trawlers still can get away with hauling up a trawl full of halibut, pick out a few targeted cod and throw the halibut back dead. If Alaskan fishermen caught AND marketed those dead halibut, with undersized ones counted this time, it would probably put many hundreds of millions of dollars a year into the Alaska ecomony, with the multiplier effect accounted for.) (You won't get any U of A folks doing a study of this.)

But Pombo was appointed chairman of the House Resources committee wasn't he? It's not like he volunteered. He was called to the front for being patient, and not made to sit in the back by being a self-promoter. Well, maybe. Anyway, look who promoted him to the front - Tom Delay, who was thrown out for malpractice himself. How many times does a Congressman get kicked out? Not often enough in my opinion.

All that to set the stage for looking at the personage that is writing one of the most important pieces of "law of the land" that fishermen will see in their lifetime. You want this person of dubious character setting the stage for who is going to get rich and who isn't in fisheries? If you can't imagine yourself being this guy's friend, you would probably lose your fishing business if he had his way. I just hope California voters have some compassion on the average fisherman and get rid of him, because you know fishermen aren't ones to fatten HIS campaign coffers.

If you've been following this blog, you'll know the winners under Pombo will be the multi-national seafood companies. Sen. Stevens Senate version of the Reauthorization of the Magnuson-Stevens Fisheries Management and Conservation Act is principally the same, it gives life to an evil called "rationalization." Webster says it is "to ascribe (one's actions) to causes that seem reasonable but do not reflect true..........causes." and "to invent plausible explanations for actions that are actually based on less acceptable causes."

I hear Californians are seeing a lot of highjinks by Pombo besides fishing law highjinks. I talked about the corruption in Alaska fish politics and got called "inflamatory." Then the FBI showed up in force in Alaska and proved me right, so now I don't know what I'm being called. If I'm being inflamatory regarding Pombo, then I guess a lot of rational people in California who are questioning their choice of Pombo fall under that heading. Pombo's Democratic challenger in the following piece is one of them, and looks to me on the surface like a good replacement for Pombo, however inflamatory he might be. You know how those Phds in mathamatics can be. LOL.

These are the worst of times I've seen in politics and no time to stand on party platforms, if the two parties in Alaska can even elucidate one. Fox News says that the National Dems are talking of using corrupt Republicans as a platform. What a backfire that would make. Neither party in Alaska wants to put a plank in called "anti-corruption," otherwise neither party in it's current form would know where to get any money. (Sarah had the honesty about her to go to the people and they responded. That should be a lesson for other honest candidates.)

There have been jokes made of the Republican Party bosses in Alaska heading for the brush in the big FBI sweep. Better to take a chance with the grizzlies. Was that a dust trail to the brush from Trident Seafood's "Oval Office" on August 16, when Con Agra's Pres and Ceo of their poultry division came to Seattle to take over from Chuck Bundrant? There was also some talk of ill health. Heck, I get ill just thinking about all the fishermen he and the other processors have done dirt to. Read that also, put out of business. It's like the processors' creed to each other is "There's only room for the two of us in this business and sometimes I wonder about you." Now that's really chicken poop, no pun indended regarding the new Trident president.

"And certainly VECO executives have been happy with the climate created by committee chair Pombo. They've shown their satisfaction by donating somewhere in the neighborhood of $17,000 dollars to the Tracy Republican since late 2004. And they weren't the only ones. Other Alaskan oil interests have shown their appreciation for his efforts. They also have donated many thousands.

Political pollster Marc Hellenthal, who said he was interviewed Friday afternoon by two FBI agents from Sacramento, said agents told him what they are looking for "goes back longer." Some Alaska press reports say VECO executives are also known for prowling the Capitol halls and even passing notes to lawmakers on the floor to influence votes.

Alaskan Democrats say the investigation points to what's wrong with the Legislature and the powerful influence of special interests. Eric Croft, D-Anchorage, calls it, "... just a culture of corruption," saying, "Lobbyists writing bills. Special interests, not only funding campaigns, but hiring legislators as consultants. A line between a consultant who does not do any work and a bribe is hard to define." Most likely this is a reference to $242,000 paid to Senator Steven's son Ben for consulting services to VECO.

Democratic congressional candidate Jerry McNerney, who is challenging Pombo for his seat stated, "I think all these questions underscore the need for stronger ethics rules in Congress, and reform of our campaign finance laws. A first start in that effort would be for Congressman Pombo to return the money that he received from VECO. It seems like every week there's some new scandal or rumor coming to light about Congressman Pombo's behavior. If we want people to believe in their government, we need a new direction in Congress. The people in the 11th district and the country expect and deserve the highest ethical behavior. They can expect that from me."

Jerry McNerney is a nationally recognized expert in wind engineering and renewable energy, with a PhD in mathematics. During his career in wind energy, McNerney's work contributed to saving the equivalent of approximately 30 million barrels of oil, or 8.3 million tons of carbon dioxide-the main greenhouse gas-as well as other harmful pollutants. The Democratic nominee for California's 11th Congressional District, Jerry has been married for 29 year and has three grown children."