3 more squads of FBI in D.C. and a wedding

"Two years ago, only 400 agents worked on public corruption cases. Now, 615 agents nationwide - including 30 in New York - are trying to nail public servants for betraying the public trust in 2,200 ongoing cases. A recent FBI search of the Alaska Statehouse was a first of its kind." 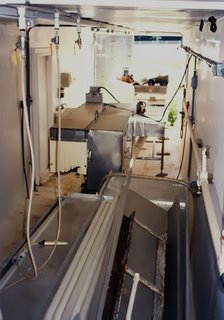 "In Washington, agents conducted unprecedented searches of the offices of the CIA's third-ranking executive and the House office of Rep. William Jefferson, D-La. Both stemmed from bribery allegations. Agent Burrus wouldn't speculate about why there is so much graft, but said, "We have to pull the whole weed up or it's just going to grow back again."

Right about now, the North Pacific Fisheries Management Council should be pulling in it's horns on more give-away action in the fisheries. Just because Ted Stevens says it's all right and "trust me, nobody is going to be able to stop us," it doesn't mean that the FBI might not follow a trail out to the Council, with National Standards or other laws in hand. Or bank records and e-mails. And not to forget, one Gubernatorial candidate in Alaska, in past years, dropped out of the race at the last minute without an explanation.

It's obvious that Alaskans are "mad as hell and not going to take it anymore." Their disgust with the status quo of Alaska politics was exemplified by the landslide victory of Sarah Palin in the primary election for governor. Sarah has an overriding principle, just follow the State Constitution. Not one other candidate cites the Constitution. It's like the Constitutions of the State and Federal Government are just a suggestion. Like, "yeah, those yellow and red lights in the intersections are just a suggestion."

All you survivalists can come out of the woods now. They aren't after you anymore. They are after the folks who are undermining the very fabric of government in the U.S. Namely the crowd who are displacing the people's inherent authority, with that of the big corporations. Of the 100 largest entities in the world now, 51 are corporations and 49 are nations. This is obviously threatening to old law and order institutions like the FBI. They aren't blind. They can see coroprations putting their business strategies into the law of the land. After the rest of the fishing ports dry up, downtown America disappears, family farms are a thing of the past, are the law and order institutions next?

It's our own fault for not putting restrictions on the corporations. But, just like a dishonest politician can win, one voter at a time, corporations can win, one legislator at a time. One thing you can do is look for integrity in your local politicians first, then you can be confident that you and the candidate are looking at the same star on the horizon.

You've heard me talk about Rep. Pombo, who is spearheading the work on a House Bill to reauthorize the Magnuson-Stevens Fisheries Management and Conservation Act. And how both his and Sen. Stevens' versions will privilege the very largest fish companies at the expense of small fishermen, small to medium fish processors, potential investors in seafood processing infrastructure, the businesses of all the fishing communities, and the ability of Shirley Ann, of Reedsport, to have a decent computer in her eighth grade classroom. All along the coastline of the United States, not just Alaska.

So take a look at a web site by folks in California who are "sick and tired of Pombo and aren't going to take it any more." His challenger looks good, but Pombo is raking in the drug company money it seems. Even a few bucks thrown the challenger's way would help all U.S. fishermen. If you think Katrina was hard on fishermen, try life under Pombo! With a natural disaster, fishermen can rebuild. When Congress gives away fishermen's fish through the Councils, there is no way to rebuild a fishing business.

As Dennis Zaki, the web-master of AlaskaReport, goes on a vacation, I'm going to take the opportunity to sneak away for a honeymoon. We're going to jet down to Ashland from Medford for a few days then back to writing for an up-and-coming fishing device web site until Dennis gets back. The ocean model is coming out soon, which I'm itching to try. These things will really spread your lines out, and don't forget your WD-40. I'll tell you what I know about it on Robin Moulder's site. Here's an article in today's Mail Tribune about it. But I have to say, a jet boat pilot for one of the tourist boats out of Grant's Pass was sailing past a good hole on the Rogue River recently and six out of six fishermen at the hole had the Bank-Ease Planer to hold their Kwik-fish or egg clusters in position in the river. So put that in your pipe and smoke it!

I have to tell a little story about the fish we're going to have at our wedding Sunday. Shawn Dochtermann came through here after fishing Bristol Bay this summer and found out we were going to have chicken at the wedding. Some guys in Alaska didn't want to chance sending their fish on Alaska Airlines. Shawn was flabergasted, bamboozled and otherwise shocked. "No way," he said, "was the fish blogger going to have KFC at his wedding." So he jetted back to Kodiak for some more fishing and getting a couple of coolers of salmon together. (The 150 pounds of kings, silvers and reds finally made it to Medford from Kodiak after being bumped three times.) (Did I hear they fired all the union baggage handlers?)

The story actually gets better. When he was here I lent him a couple of books on the founding days of the commercial salmon industry in Alaska. They had been suggested to him just days before in San Francisco, so was he surprised I had them. So he took them fishing halibut in the Bering Sea in early September, keeping them in his waterproof dufflebag when he wasn't fishing, on wheelwatch, sleeping or reading. Well, 30 miles short of the unloading dock on St. Paul Island, the boat took a rogue wave on the stern. He was dilligent to abandon ship with the duffle bag in tow, and a day later when he called, he first assured me my books were safe and sound. I'm pretty sure now the saying was supposed to be "Loyalty is next to Godliness."