Who are the good guys? Check your integrity meter

A long time ago, Samuel Adams, one of our founding fathers, not the beer maker, said: "If ye love wealth better than liberty, the tranquillity of servitude than the animating contest of freedom, - go from us in peace." 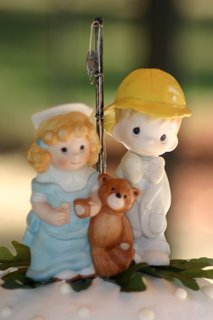 The cake toppers when the fish blogger married the nurse last Sunday (a 80,000 page view day on AlaskaReport, by the way). (I formed, baked and sprayed the fisherman's hat on and made a trolling spoon from a smashed .22 lead.)

We ask not your counsels or arms. Crouch down and lick the hands which feed you. May your chains sit lightly upon you, and may posterity forget that ye were our countrymen!"

There are plenty of resources and land to support everyone, so why the malise of fear of the future that drives fishermen to side with monopolistic seafood corporations? The shortage problem seems imminent when viewed in terms of only variants of fisheries management "rationalization." There was no shortage for fish before all the privatization programs began. The only shortages are for those companies and fishermen whose egos are larger than their current boat or plant. Processing plant owners fuel the privatization push by holding down ex-vessel prices so fishermen will fight for larger individual catches. The plants finance many boats who become their allies in a closed loop of mutual support. They don't need any more boats (the rest of the fleet) or the communities.

Enter, stage left, some folks who Bill O'Rilley calls "culture warriors" in a recent book by that title. I have been using the old term "social entrepreneur" and even put it on my Blogger profile as an occupation. But I'm tired of the spelling challenge. So here's to those brave souls who labor for the principles that make us strong as a GROUP. More like Sarah Palin are stepping forward all the time. I have to warn you though, they won't sidle up to the powerful purse-string holders of the world. So if you are looking for pork, these folks aren't for you. But they will dedicate their fortunes and reputations to see that the 98% get an even break.

I doubt we will cover all Alaska Legislative races before November, so just get your integrity meter out and hold it up to your local candidates. Remember, office skills aren't a prerequisite for the makings of a good Legislator. Integrity is though. Here's a look at some races, starting with that dynamo Charlie Davidson, who is running against a pretty much do-nothing candidate in Kodiak.

"Davidson also touched on seafood rationalization, calling the privatization of king crab that took place in recent years "a travesty of justice." Davidson said he believes regulations put in place by the North Pacific Fishery Management Council should one day be overturned in the courts. Stevens was not asked to address the issue directly when it was his turn to take questions."

I'm sure Stevens wiggled his way out of that situation. How could he answer a question about how he views "rationalization" when he stood by and allowed it to happen all around Kodiak (while he sat in Juneau)? And when 98% of his constituents oppose "rationalization." Oh, I forgot, Sen. Gary Stevens of Kodiak used to be a processing plant manager. You know, steeped in the plant management culture of "take a little then they're not looking and give a little when they are." All I have to say is, coastal communities better take a second look at local politicians who have a seafood processing background. It's like inviting Don Corleone to run your bingo game. You aren't going to want what comes next.

In the Governor's race, Halcro minces no words in his disapproval of Tony Knowles' past performance. In particular, his lack of a stand on anything of consequence. Many percieve him to be a shadowy figure who attempted to avoid controversy by going with the strongest gust of wind at the moment. Most Alaskans will never know how he stood in the way of a solid 36 to 4 Legislative move to balance the budget. And how he stood back and watched, even helped, the process of handing over the ownership of the living marine resources in the EEZ to foreign and Seattle corporations.

"Halcro feels a governor should show strong leadership in dealing with the Legislature, and he faults Knowles for not doing enough of this. For example, he would signal early on that he would veto bills as a way to get legislators to fashion bills in a more acceptable way. "You have to get out in front of the process. You have to stand up and bring in the public to influence the Legislature," he said."

Good, Andy, but it's not a novel concept. When you get unbiased media, finally, like AlaskaReport, and have a heart to help, giving the public the heads up on bills in progress in Juneau is exactly the kind of thing we do. And "bringing in the public to influence the Legislature" isn't going to happen in a Governor's busy schedule. That sounds like a "campaign promise." And we all know how far you can throw a campaign promise. It's the media's job to do this, it's just that the media drops the ball. We already "see through a glass darkly," so there's no reason to keep any more of the truth from the public.

There's an immense amount of damage control that now needs to be done in Juneau to salvage what recent Governors and Legislators have wrought. Alaska has enough trouble without trying to play catch-up. But bringing the process into the open, puts all of us in the position of problem solver. Nothing like honest media to usher in honest government. Without Ben Stevens to suck up to in Juneau, maybe the Legislature will get real, even if many of them do make it past November.

Whether or not any of us columnists individually continue contributing to this pro-bono public advocacy site, the site's future rests on continued unvarnished truth and perceptive analysis. All of us are writing from a perspective we feel strongly about and the combination goes a long way toward cleaning the windows of public policy making. For example, the Governor is holding a Salmon Confab in early October in Anchorage. Well, you have to get an invite. Is all you get out of something like that is another meeting of the self-agrandizement society.

That greatest of all "culture warriors," Mahatma Ghandi, said it takes faith and courage. The current Pope says it takes faith and reason. I think Ghandi just assumed people were reasonable. You can't assume that anymore. When you have entire legislative bodies that keep a sharper eye out for their perks than the free enterprise system, you gotta get your sights up above the crowd and look for stand-outs.

Charlie Davidson in Kodiak is one, Sarah Palin of course is one, Mark Stopha in Juneau is one, Shawn Dochterman in Kodiak is one, but he's not running for any office. Stephen Tauphen and myself have been active "culture warriors" for fifteen years in the fisheries in Alaska. John Finley in Kodiak is one, who goes back to the great privatization of salmon in the early 70s, Dennis Zaki, our intrepid webmaster is one, Terry Haines is one. Terry just needs to feel a little prostate irritation, to see his mortality, to crank up his writing. That sounds familiar. LOL

Found a mother lode of culture warriors here. These are the guys that I wrote my original white paper for, entitled Small Seafood Processors Association. Well, it went into the Legislative Black Hole of Good Ideas and never came out in one piece. Sorry guys.