Alaskans can choose between Paradise lost or Paradigm shift

I titled this submission from a reader this way, because Alaskans really can make this choice, by who they choose as representatives to state and federal law-making bodies. You can have vibrant fishing communities, or you can have condos all along the waterfront to look at the Seattle trawlers with high power telescopes, because they have no need to bring the fish to traditional Alaska processing plants. 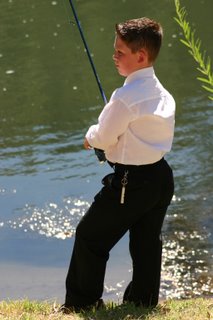 Young man at the Fish Blogger's wedding on the Rogue River: "There might not be ..., but by gosh there'll be fishing."

"John, Welcome back, we all hope the wedding was a great success.
This last week has confirmed what many people have told me about the FBI's ever-expanding dragnet into the Adak/Stevens cover up. They may belooking at the spider web of ties between Ben Stevens (as a lobbyist), Tony Knowles (as the Governor), Kevin Duffy (as Commissioner of AlaskaFish & Game), Robert Thorstenson Jr. (AKA Bobby Jr., a major shareholder of Icicle Seafoods, AKA Bobby T. as President of United Fishermen of Alaska, AKA Bobby of Southeast Revitalization Committee, AKA Bobby of Southeast Alaska Seiners Association (SEAS) and, most importantly, AKA Robert Thorstenson Jr. of Alaska Fisheries Marketing Board.)

By now everyone in Alaska must be experiencing that horrible feeling that occurs when naked power and greed, derived from nepotism, finally spill into the public spotlight. Adak is the best example of this- not because it was unusual behavior for Ted Stevens-or for the size of the theft (tens of millions annually of the once-public resource that Pollock had been). No, Adak has to be more carefully examined because of the two legal actions which help the general public to see through the normally cloaked world of organized crime.

This might be old news for some, but with the FBI actions, up-coming Governors' race and new documents recently discovered (in one of which Bob Thorstenson Jr., as President of United Fisherman of Alaska calls Tony Knowles a liar, see letter) this is worth another look. Who is Bobby, and why would he call Knowles a liar? He is one of the largest stockholders of Icicle Seafoods, a long standing Alaskan-style cannery/freezing plant for salmon, halibut, crab and cod.

They were conservative and did not get into pollock until late in the game. Infact, they were the only processor that tried to stop Ted Stevens' AFApush, and it was only after they purchased the larger pollock processing vessel, the Northern Victor, that they did a 180 degree turn andswitched to supporting AFA. Icicle also used to complain that the early IFQ program on halibut and black cod only helped the fisherman (after looking at Crab Ratz, thank God for that.)

Bobby was smart enough to take over the UFA and masquerade as a fisherman looking out for Alaskan fishermen's interests, as opposed to his own interests as a major stockholder in one of the larger salmon processors. He was very active in the State of Alaska's Salmon task force groups and countless others. Under his fisherman's guise, he steered UFA into supporting Crab Ratz and Gulf of Alaska Ratz, which is in direct opposition to the interests of fishermen.

More markets and more buyers of fish would help fishermen, not the opposite. During this time he sat on many boards that included Ben Stevens, and it is my understanding that this is when the ideas were hatched for Ben's father to find federal dollars to grant back to salmon processors (like Icicle) and for creating the Alaska Fisheries Marketing Board (AFMB) instead of working with the existing Alaska Salmon Marketing Institute (ASMI).

The name Alaska Fisheries Marketing Board was designed to be easily confused with ASMI, therefore the public was not always aware of the differing agendas of these differing Marketing Boards. Ben Stevens, his partner Trevor McCabe, and Bobby all sat on the board of the AFMB. The grant money moving from AFMB to a couple of seafood companies is now well known, as is the money back to Ben and Trevor - some paid directly to Ben and some to his various companies: Advance North, Ben A Stevens, Ben Stevens & Assoc, helping to conceal both the amounts paid and the fact that people were paying Ben Stevens to lobby his father.

Icicle is even more interesting, both because of the relationship between Bobby and Ben, and because it was Icicle that offered to sell Ben the then-secret stock option (on June 29, 2002) for $500,000, the same number that soon comes up in salmon buyback meetings where it was openly discussed that they had to "get $500,000 off the books" to Ben Stevens to secure his help getting Ted Stevens to earmark a grant for salmon just like the one Ted had done for crab.

During this time Icicle was buying a lot of brown king crab - which is sold as Golden Crab - using various companies to hide the fact that they were going around the recent crab cap under the AFA (which Ben's father had passed.) That is right, Ben was a secret shareholder in a company that was breaking this law. And not only was he president of Adak Fisheries, he was also advising (for large consultant fees) the other companies involved, sitting on the board of some, and holding office in others.

This group of companies (Adak Fisheries, Aleut Enterprise Corporation,etc.) then purchased over 4,000,000 lbs of brown king crab -approx $13,000,000. ex-vessel (see NOAA letter.) This was not one transaction, where one could argue they somehow didn't understand the law. This was 2 years of deliberate illegal acts, yet no one was charged criminally. Where were the Alaska Troopers who normally show for every offload - ask any of the King and Snow crab boats - and check every crew member, arrest them for traffic warrants, walk all over your crab looking for accidentally small crab, looking for any and all possible violations.

Remember it is a crime for the captain if just one crew member screws up and lets one undersize crab get by. So who called off the dogs? And who had the power to limit the fine for these actions to less than the profit Icicle would have made? Who kept the State out of this - normally the State would have input into such matters with NOAA. Would it be the Governor Knowles? Maybe someone in a top position in Alaska Fish & Game like Kevin Duffy? Remember him - he was he guy who helped twist arms on the 90/10 processors rights, and he voted 90/10 even though his boss (Tony) said he was ordered to vote for a 70/30 buyer split.

Tony said this in 2003 (see letter) and again recently in Kodiak, stating "problems with Crab Ratz". Why would Kevin Duffy go easy on Ben and Icicle Seafoods? Let's not forget the great job At-Sea-Processors Assn. (At-Sea) rewarded Trevor McCabe with immediately after Trevor helped pass AFA, which netted $90,000,000 to American Seafoods? Coincidentally, the former President of American Seafoods, Mike Hyde (Attorney) and Trevor McCabe (Attorney) (partner of Ben Stevens in Advance North) are partners in the real estate that sits at the other end of the Bridge to Nowhere, along with Art Nelson., son in law of Don Young.

What was Kevin looking forward to when he went against the wishes of Governor Tony on the 70/30 split and sold the State down the river on 90/10?? For the record, the Fish and Game seat on the NPFMC is not supposed to kowtow to the governor; they are supposed to vote for the right thing for the people of the State of Alaska. Kevin Duffy must have been the right man at the right time, because about the same time NOAA announced the agreed-to fine of only $3,400,000 (again, this is less than the profit gained by breaking the law) - without one criminal complaint - he got a job taking over for Trevor at At-Sea, which is also where Don Young's son-in-law Art Nelson (now of Alaska Fish & Game Board) was working. (All these guys are for fast tracking Processor Quota programs.)

NOAA, after a year of deliberation, announces 11/29/04 a settlement and small fine. Ben Stevens' offer is rejected by other new partners on 12/23/04 - after Ted Stevens has attached an "earmark" already. Ben Stevens' secret option expires on 12/31/04 - (needs another $450,000). The Adak pollock "earmark" ride passes in early Jan. 2005 on the bill that Ted Stevens had attached it to. Legal action starts during 2005, which gives the public their first look into Ben's enrichment from his secret stock options.

So who is lying? Tony or Kevin Duffy? Or did they both use their influence to help Icicle and Ben Stevens? Look at the actions, Kevin gets a great job around the time Icicle gets off the hook, Ben does not go to jail nor even get indicted, in fact it looks like he is about to become very rich, Crab Ratz is a big winner for Icicle, Ben + Trevor made hundreds of thousands dollars inconsulting fees ... Bobby T is clearly in the center of power. Just look at the pompous "Executive Man of the Year" UFA awarded to Kevin Duffy (for screwing the fishermen and immediately moving to Seattle).

Question - Who was Duffy's boss during the last phase of the cover up? Answer- the next UFA/ Bobby T. "Executive Man of the Year". The biggest pigs get the most. Interestingly, a guy I know attended a very early crab scoping meeting during the first serious talk of crab quota for processors - he was standing with the crab guys who were cooperatively discussing the possibility of splitting their crab rights with the processors at around the 50/50 mark, when Joe Plesha jumped in and said "it was already decided at 90/10, don't waste our time," then he threatened to hold up the crab boat buyback in same breath.

Here is my nagging question: Everyone knows Ben cannot legally accept money to lobby his dad, so when asked about the fees going his way they cite consulting, or his deep knowledge of Congress... but how is that possible if the act in question (for example Crab Ratz) was an earmark, added in the dead of the night solely by Ted Stevens? Who else could Ben be talking to? Only one man was responsible, there was no Congress. Neither Crab Ratz nor Adak/Pollack was debated in the Senate, where one might have claimed Ben was talking to anyone else.

I've said before that no native corporation is in a position to sue the son of their benefactor Ted Stevens, so I was surprised to read in the legal documents pertaining to Adak, and in Ben's statements from his radio interviews, that he claimed "they (Aleut Corp) are trying to take away our plant." Aleut Corporation vs. Adak Seafoods (Solberg & Ben Stevens) I could not help but notice Aleut Corps' lawyer is Stan Lewis of Birch, Horton & Bittner. Bittner is Ted Stevens' brother-in-law.You're telling me that the Aleut Corp is seriously chasing Ben Stevens using a law firm founded and run by his uncle? That looks more like a group that is going to make sure no harm comes to the little prince.

Part Two-how many more people are over the line in Adak?"