To catch the last salmon

"We have been warned that if things continue going in the direction they're going without anybody stepping in, the rest of Puget Sound could start looking like Hood Canal." 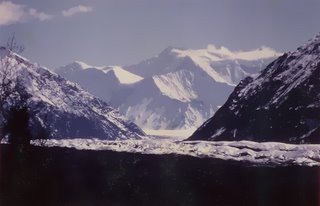 I should go back to this glacier in Alaska and see how much it has melted since 1972 when I took this pic. from the road near Palmer.

And this is what happened up the way in Vancouver: "Once there were 50 salmon streams in Vancouver, supporting an annual run of more than 100,000 fish. But one by one they were diverted into storm drains, polluted or paved over, until only Musqueam Creek sustained a small and dwindling run of wild salmon."

These two situations are different. The first is a natural phenomenon, and the second is a man-made phenomenom. The good news about Musqueam Creek is that a water main broke and flushed everything out of the creek, and the chlorinated water killed the food for any fingerling who might have survived the deluge. About six adult coho last used the creek. That was good news only because it gave publicity to a couple of guys that had been trying to save the coho run for ten years. With major restoration work, they had 66 adult coho come back at last count.

But salmon runs don't often have the benefit of some eye-opening disaster. It's little insults to the ecology of the streams and rivers, like the day this summer in the Rogue Valley when Bear Creek suddenly went from clear to dark brown; massively muddy. Then it cleared up in the next few days. But life went on around here with out skipping a beat, except for all the steelhead and salmon fry that might have suffered, their food sources suffered, and the spawning gravel silted in a bunch more. They did get a little concerned when three gravel companies in Eugene were examined for making the Willamette River noticeably muddier. One of them had an overflow pipe dumping the mud in the river in plain sight. For how long? Does it take an irate public to get the government officials to take a constructive step.

I guess you have to realize it was Oregon who sat back and let the Feds turn off the water to the Klamath River so they could get another Republican Senator to Washington D.C.

The same situation has been the norm in Alaska. Governor Murkowski put a mining lobbyist in charge of the Department of Fish and Game, coincidentally just when foreign mining interests wanted to build the biggest mine in the world right next to the biggest wild runs of salmon in the world. This same Commissioner is back in D.C. pushing for the Governor's big business agenda on all fronts as we speak. We need to pray not that God will shorten the End Times, but that He would shorten the end of Governor Murkowski's term in office.

The State should give preference to those companies that want to do what fits in well with the rest of Alaska. Young Alaskans, and the young Oregonian in my last post, for at least one other, would like the chance to go commercial fishing too. And I'm quite sure the first thing they are going to find, if their opportunities aren't ALL taken from them, is how much fish is left. Don't get the idea that people won't wipe out every last fish if they had a chance.

President Bush came out against "unregulated destructive bottom-trawling." Some jokers are saying that he didn't mean in U.S. waters. Don't listen to that. We have unregulated fishing going on all over the place in our 200 mile EEZ. Take a look at the 30 or so bottom-trawlers dragging the Portlock Banks in the Gulf of Alaska. They will be going for Pacific cod and get mostly halibut in the cod end when they pull the trawl up. And that doesn't include about as much baby halibut that they don't count, all of which has to be thrown over dead. Because the North Pacific Council or their helpers up or down the gravy train say to only count the legal species. Is the newborn now not a species?

I regret that anyone would not distance themselves full bore from this kind of thinking. And the kind of thinking that would deliberately or recklessly harm the economic welfare of a whole class of people at one time (a whole group of fishermen, or future fishermen). One prominent member of the Club that doesn't think other life counts much is trying to be the next Governor of Alaska. And the initials aren't SP.

I have to make a little announcement here regarding a lot of people thinking Sarah Palin is listening to the wrong people. A little bird that read his 160 e-mails today and answered my concerns about this subject said: "excluding the KKK, Sarah will give an ear to anyone." That, in no regards, translates into buying into anything, or promising anyone anything. She is purposely not expressing any leanings toward anybody, because this has always been the case. She's not going to continue the practice of promising people positions and support before she has all the facts. Anybody here ever buy the first car you see on a car lot? That right there is smarter than what we've seen before in an Alaska gubernatorial race. (And I say again, this is no time to be partisan when you see an honest candidate.)

Then here: "Salmon remain in the ocean, where they mature and take on weight. Some are caught by Japanese and Russian fishing trawlers. Ocean conditions are the single biggest factor that determines whether the fish return to spawn or die at sea, according to NOAA. Food-filled cold currents are good for the fish, warm currents bad." This writer should read the stuff that is prepared for the North Pacific Fisheries Management Council. Buried in there real deep it says that American, not Russian or Japanese, trawlers are catching between 200,000 and 300,000 salmon a year in the North Pacific and a lot of them are kings. (King salmon from all the Pacific ocean rivers mill around up there, often on the bottom to over 100 fathoms, feeding on juvenile fish of all kinds that grow up near the bottom.)

You know why it seems like we are always playing catch-up to restore salmon runs? Because we are outnumbered by quite a bit by other people who don't figure the future of salmon in their activities much at all. Take the bulk of everyone down here that sprays weed killer on their property. The stuff ends up in the nearest river in enough strength, not enough to kill outright, but just enough to get caddis fly larvae to shed their shells. Then when they try to build a new one, they poop out easily and die, removing a prime source of feed from the river for baby salmon and steelhead.

A lot things like this are being addressed by folks who see that it will take a concerted effort by everyone to achieve the desired results. It's not like people don't want salmon and steelhead around for future generations of anglers and commercial fishermen. It's just that they don't know there is a river around the bend, or that their Roundup will someday soon start to leach into that river miles away. It's not really willful ignorance, but the common garden variety.

But the head of Google says that in five years or so, we are going to be so connected by the Internet, in a true democracy, that you'll be able to actually turn on my proverbial "B.S. Meter." It's the beta model of my later version, the "Intergity Meter." Only goes to show you have to be careful or a manufacturer will run with your ideas. LOL

Well, I wanted to stick with fish streams today. The Klamath can't win for losing. It continues to struggle with low water: agriculture all over southern Oregon and N. California, lower amounts of rain, parasites in the river killing off the young salmon. Now an oil tank truck tips over and spills a pile of asphalt oil along the bank. I'm sure the people that put out SpawnDigestNews, an e-mail magazine to alert folks to goings on in N.W. salmon streams, would say: "do whatever is humanly possible to protect the streams in Alaska, because the weather will hand you all the trouble you want."

A Rogue fisherman told me he heard of the word "dog" used to describe some salmon that aren't in the River any more. Did they have a run of chum salmon? A lot of the little streams branching off larger creeks around Petersburg, Alaska had good runs of chum, coho, sockeye and pinks when I was young. You might find a few stragglers in many of the streams now if you're lucky. Commercial fishermen had fished them in the mouths of the streams in Alaska for a hundred years by the time I came along and they were still there.

The Klamath didn't die off just recently. Someone built a cannery in the mouth of the Rogue, for example, and didn't stop seining in the River mouth until 1929. A gold dredge, like the big Alaskan variety, was placed in the middle of the Klamath River for many years. Then they built four dams on it's tributaries, with no fish ladders. They are still there with no ladders.

One expert has said that there is no hope for the runs down here. The Bonneville Power Administration has spent over three billion dollars and the runs keep dwindling beyond "endangered" on the Snake and the Columbia. Is Alaska next? If not, I suggest that the institution structure Alaska has to prosecute the fisheries need to be radically altered, and that includes the NPFMC.