Contribute to the solution

Back when I was an economist for the Alaska Commercial Fishing and Agriculture Bank, I predicted a sustained yield harvest of salmon in Alaska of 150 million fish a year. The last couple of years says I was way low. Then there was this year, a harvest of 140 million. I was only looking at my lifetime, as a lot of people tend to do, I think. 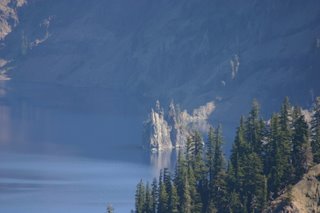 They call this island in Crater Lake, the Mystery Ship. Sitting on the back deck of the lodge and having a beer is a favorite thing for me to do. About the only place I'll have a beer anymore.

I remember bumping into a retired doctor in the city park in Dallas, OR and him still apologizing for a deceased friend who had been in charge of Oregon Fish and Game. It was during his time that the logging companies did so much damage to the wild runs of salmon in Oregon, during the post WWII boom in logging. I saw a map on the wall of Oregon Trout yesterday, that showed the vast loss of range of Pacific salmon in the Northwest. An area about the size of the whole state of Oregon.

Looking back at the statistics doesn't do any good though. The focus should always be on the future so you can make good plans. And that includes the Alaska Fish and Game Department's failure to forsee the bad run of pinks in S.E. this year. Probably goes to show that the ADF&G was underfunded by both the Legislature and the Governor. Unless the ADF&G was just not doing their jobs. We'll probably never know.

I found out that you can drive up Highway 62 out of Medford and get to a bridge where it crosses the Upper Rogue River and see the kings spawning. I got curious the other day about a certain spot on Bear Creek, right in the middle of Medford. I had to walk across this pesky park LOL and then under the Interstate. Where lo and behold, king salmon were ramming into a small dam, where the bottom of the fish ladder was a foot and a half out of water. They had a lot more room to butt their heads out in the middle of the creek.

I noticed another funny thing, that when you grow up running up and down creeks chasing salmon in the summers, you tend to go looking for salmon from then on. Once in a while you can help to restore a run in small or big ways. You'd be surprised at how many little dams like this one in downtown Medford are still around. And how many times the creeks turn like soup with all the dirt in it.

But one thing is for sure, get Oregon Trout or someone to show you where you can see some salmon around here before they are the last ones that anyone will see in that stream or other. The first fishing war story I heard this fall was from a preacher right over the pulpit. Made a big impression on me. Seems the pastor was fly fishing on the Rogue, with this "see me, I got this cool fishing outfit on" sense of ownership of the patch of creek bottom he was standing on. He proceeded to hook a real lunker, but it turned out to be a anchor line, covered like spots on a Cutthroat trout, with lurhs, spinners and other flys.

The other one wasn't as exciting, but yielded the same number of fish: none. Robin Moulder, of Moulder Inc., took me out one evening to the Rogue to show me his patented Planer. The Planer takes your line out to the middle of the stream and lets your bait or luhr just bob along right where you want it to. No better system has come along to simplify stream and river fishing. Should make it easy for anyone to go out and catch something. The ocean planer will spread your lines out for a lot better footprint trolling out on the lake or in salt water.

But the real story was us standing on that bank, actually on a front lawn, in the late evening on the Rogue River. The mists were starting to form, and a summer steelie jumped near the far shore. It looked almost like a vision through that light mist. No wonder steelheaders get so psyched up over fishing for them, the places they go are some of the coolest places in my opinion. I'm sure though that if there weren't any fish in the stream anymore, I'd have a different outlook.

And I hope that nobody else is worrying that Sarah Palin is "listening" to advisors. AlaskaReport.com would have heard of any fisheries advisors by now if there were any. Yeah, we've heard the rumors too. They're just gathering data at this time. Woudn't you? Like I said, contributing to the solution is all that is important. Pick your problem, there's more choices than you can shake a stick at.

And a friendly letter from a reader on his experience commenting on an Anchorage Daily News blog:

"Hi John-
A few of the people gave me some flack (tonies) and I even had some yanked (Probably because I e-mailed them to my union business Agent). She's suddenly on personal leave and I wonder if there is maybe more to the story of why she took leave. I think My union bashing has been read by the right folks. Maybe she is suspended. She had some do nothing State DOL job as a political appointment under Knowles, and would be back there if he was elected.

I think I put all there is to say there (ADN) for now.

I think the end is I work on setting up a sampling program for the Factory trawlers so there is some transparency there, but we'll see what the court can do for the situation. I think the MSA reauthorization is obviously tainted with the same spirit that is present in the Staate Legislature.

Do you have a Fax? I could send my opening brief from the Ninth Circuit. I alledge an "ethics crisis" and list the major players; Bennie, ADAK,VECO. There has even been some more events (Irwin, Pipeline neglect, etc) thet were probably looked at. The dates they(FBI) started (their)investigation was October 2005, which was a month after the brief was filed.

I heard Ray's(Metcalf) stuff was stuck in State Court, and when he approached the FEDS he was told he had to exhaust his case there. I pointed the Ninth Circuit towards the stuff he had come up with. Take care-"