"John,
I saw this tonight- the episode "Is God Green" which was about some churches getting more spiritual toward stewardship of the Earth, and the resulting political split from the global warming naysayers currrently interpreting for the flocks." Moyers on America 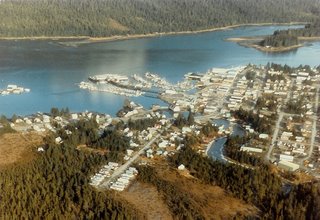 I'm not sure why this e-mail struck me as important, except that the probable next governor of Alaska is a bona-fide Christian, as 85% of us profess to be in the U.S. And that she is running on a platform of "throw the bums out." Her opponent being one of them, if taking billions of dollars away from Alaskan fishermen and communities is any yardstick.

And a worry I keep hearing is that the candidate is "listening to" the second category of Christians in the first paragraph. I know that at least some of these love the accumulation of wealth and regard it as a sign that God is favoring them. I should know because I found myself in a now-defunct church in Anchorage that taught this, not in so many words, but the message was clear. It's kind of like the big seafood companies corraling all the economic advantage from the fish resources in Alaska by banding together. The part of the Christian right that bands together with them benefits from the largess of the whole scam. The environment and the middle class is left sucking gas real bad.

Part of Kodiak's problem in trying to defend itself from "The Sting" (remember that Paul Newman movie) is that those in self-apointed leadership positions in the fishing industry there, and many in city and borough government, have created a profitable little scam. And some of the above is used, like Manifest Destiny was in the 1800s, to run roughshod over the unorganized and powerless.

Is what I consider a blessing from God is the transparency that the Internet brings. Check out this expose' from the "starting-to-organize" fishermen in Kodiak. Charlie Davidson, the City Councilman and candidate for Alaska State Senate is right, "the processors are our enemy."

"ENOUGH IS ENOUGH, THE GUILLOTINE MUST FALL!

Kodiak Alaska is the home to the ANTI RATZ movement of the entire universe; where fishermen look like fishermen, and have the nature to stand up for their rights! The city of Kodiak is colored with many different ethnic groups and they coexist just like fish in the sea. The only separation of types of peoples in the town are between those who are truly communal and those that want to take everything from the rest. When it comes to fish politics and lobbyists there are a lot of rotten fish that need to be discarded.

Where do we start? Okay, the city of Kodiak employs a lawyer, a lobbyist, and a fisheries consultant. They would be William Bittner, Brad Gilman, and Joe Sullivan. Bittner is Ted Stevens' brother-in-law and works in a high-powered D.C. lobbying firm of Birch, Horton, Bittner, and Cherot. Mr.Gilman is a prominent lobbyist in the US Senate and House, and it just so happens that he's worked for Ted in the past. Joe Sullivan is the citys' consultant, AKA, fisheries power broker for hire to the highest bidder.

Next round; the Kodiak crowd that pushes the trains and needs to take the blame. Julie Bonnie, director of the AK GroundFISH Lobbying Bank, I mean AK Groundfish Lying Bank. Oh, her card says Data Bank. Shouldn't an independent organization like the McDowell group be calculating the trawl fisheries stats for the Gulf of Alaska?

Linda Kozak is the team leader (consultant) for crab clients, the Leader Corp, and Dick Powell. Dick is a fish magnate (who testified at a Congressional hearing on "crab ratz" in Feb. of 2004), that now leaves the "big house" empty in Kodiak, as Vegas must be where the game is played. (Or maybe another trail of dust out of Dodge.)

One wonders when Joe Sullivan, who represents many different clients for the law firm of Mundt & McGregor, would be ready to declare conflicted interests. Especially since Stephanie Madsen, at the April 2006 NPFMC staff tasking meeting, alluded to the fact that he was representing conflicted interests. Was Joe involved in helping piece together AFA Pollock in the Bering Sea for the factory trawlers? Who knows? Was he player in "crab ratz"? Who are his clients in crab rationalization? Boat owners? Processors? Why doesn't someone ask him, so for once we might get a straight answer. And why does he have an apartment at Dick Powell's house? Does Joe work for Dick too?

Now Linda and Joe are always at all the "crab ratz" investors (boat owners) meetings. Do you suppose that they have some clients that overlap? The voices in Kodiak say , YES! But who are these clients? Would they both like to fill in the blanks on AlaskaReport.com, so we can disassociate them from hitching up to the same fish magnates that have stock in these fishery allocation goldmines.

Jump back to the City and it's wonderful choice of associates, such as Bradley J. Gilman. His father was a well respect former state legislator in Alaska. Ben Stevens and Brad have been friends since 5th grade. They own a consulting/lobbying firm together, and I think its called Advance North, you know, like getting an advance before anyone else knows, and "way up North"! Gilman took Ben's clients as soon as Ben got tapped by Tony Knowles to be a State Senator in Alaska. They include Trident Seafoods and Alaska Groundfish Data Bank (AGDB).

Ben was their lobbyist in the US Senate from 1998 until his appointment. Gilman presently lobbies for West Coast Pacific Fisheries Association, the Pacific States Marine Fisheries Commission, the city of Craig, Unalaska, Petersburg, King Cove, Kodiak, as well as the Kodiak Island Borough, the Aleutains East Borough, plus Yardarm Knot Fisheries, Trident, & AGDB. So please tell us Brad, who do you really work for? He also worked on getting the Rockfish Pilot Program in the MSA.

There is a Gulf of Alaska Groundfish Task Force that was formed by the joint city and borough of Kodiak. Who sits on it? None other than Linda and Julie. They both want one thing for their clients; to scoop the most fisheries allocations and let the rest of the community take the scraps. Well, in Kodiak we don't ride any trains. And we won't accept a few fishermen and processors taking control of our front yard's resources with Uncle Teds' illegal penmanship.

Joe and Julie just happen to be on the same state appointed stakeholders group that formed some crazy scheme to allow privatization of our state waters. But in Alaska, our Constitution only allows for common usage, and with the least impingements to everyone's rights to a natural resource. Both of them tried to convince the coastal communities that it was the SB113 train and you had better jump on, as their train was due to arrive in Ben Stevens' station quite soon. (Alaska Senate Bill 113 would have taken quota shares of salmon from the fishermen and given them to big corporations, basically.)(Ben Stevens, the son of the person third in line of succession to the President, now finds his offices continually raided by FBI agents and now has a criminal attorney.)

There's only one problem in Kodiak; we'll fight for our rights to fish as much as we like to fish. So the train came to a screeching halt when none other than former bush rat Governor, Jay Hammond, wrote an editorial that will be remembered in Alaskan History for centuries to come, BEN STEVENS: LEGISLATOR OR LOBBYIST? on May 1, 2005 in the ADN.

Now only a few more questions to ask. Ben is in hot water with the Department of Justice, Public Integrity Division, the FBI, and all those agencies that are probing for bribery, fraud, and racketeering with fish processors and oil companies. So who has been paying him, convolutedly? For what legislation?

One last questions for Kodiak, in two parts of course. If Dick Powell accidentally paid $100,000 to Ben to get special treatment from Ted on "crab ratz," was it paid in cash or in casino chips? Once that question is answered, then as Paul Harvey always says, "we'll know the rest of the story." How much money have our lady lobbyists cost this community?

Numerous lifelong fishermen are out of action, due to high profile greed. It's their check book against our 'passion to uphold the constitution". When you see one of these lady lobbyists, who represent God-knows-who, remind them that we will not stop until justice is served . It would be more appropriate if the Justice Department dealt with this, instead of the fishermen themselves. We don't have guillotines in Alaska, but I guarantee it's so-long evil fish magnates, hello grassroots fisheries harvesters in Alaska!

Now I hafta say that Kodiak fishermen are finally engaging the enemy head on and really trying to hold the line for fishermen all over the U.S. If the Magnuson-Stevens Act is reauthorized, with the current provisions that will allow continued consolidation to big business, then little fishing towns all over the U.S. will fall to the condo developers one and all.

And consolidation is not more efficient. Large operations get lax when they have a partial monopoly and don't modernize, or in general, break a sweat. Look at how long the one pound tall can of salmon has been around. Look at how destructive bottom trawling by the big factory trawlers is. They can tow such a big heavy trawl that everything comes up, bottom and all. The locally owned boats mostly use selective fishing methods like pots, jigging machines and longlines. They have to live there.

Neither is consolidation safer. The corporations can, and are, telling "their" boats to go out when and where the head office desires. Storm or no storm, sea ice or no sea ice. Is this what we want our national fishing fleet to look like. Without stopping the whole privatization, "rationalization," "cooperative," processor shares train, the end of it is low paid Chinese to man the few boats the corporations would need to catch all the fish, albiet, very destructively.

The precipitous drop in king crab crew wages, after 1,100 of these guys lost their jobs, is a harbinger of things to come at this rate. Which shell are the paychecks under? The folks who would like the Gulf of Alaska groundfish pay-checks as well. There's big money at stake so heads and hearts are bound to be turned.