I think this fisherman in Kodiak has about put the whole problem with the North Pacific and other U.S. fishing grounds in a nutshell. He says: 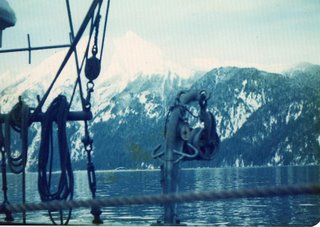 I found myself fishing one winter on Fred Haltiner's first boat the "Siren" in Port Houghton for bait herring.

Bottom trawling is a very wasteful and destructive method of commercial fishing. It is wasteful because it is very indiscriminate in the catch it brings to the surface. Much of the catch is discarded dead back into the ocean and only the target specie is retained. This is an insane method to catch fish.

Bottom trawling is destructive as it destroys the ocean floor as huge trawls and doors to spread the nets are dragged along the bottom. It is long past time to have this practice highly regulated if not abolished.

I have been involved in the commercial fishing industry in Alaska for 51 years. I am now 60 years old. In that time I have owned many different vessels, from a 50-foot salmon seiner to a 102-foot Bering Sea crab boat. Presently I own a 60-foot combination boat.

I earn most of my income from the halibut longline fishery, which is also a bottom fishery, but with individual hooks instead of a trawl hauled across the bottom. In a whole season, catching 200,000 pounds of halibut, we catch a few hundred pounds of fish we don't sell to a processor. Nearly all the fish unable to be sold are returned to the water alive.

While the president doesn't get high marks from the environmental community, I would expect as an active, outdoor person, the environment is an important concern to him. His stand against bottom trawling on the high seas and the inshore waters of the United States of America would be an incredibly important step for the environmental health of the world's oceans.

You know, we always talk about "the Market" in such hushed tones like it was the great unknown, a Holy Grail of sorts that can never be approached by mere mortals. Get real. They are reading these words too. I've been looking at the Family Farm Movement down here lately too because of it's similarity to Family Fishing Operations. But I started seeing articles about small scale organic farming a few years ago and a recent article in Northwest's ag weekly, capitalpress.com. about a Family Farm Festival in Skagit County, WA.

A pear farmer here in the Rogue Valley was telling how he can't afford to grow pears for the local buyers, because the industrial scale pear farmers can produce pears so much cheaper. This trend to large agri-business has been fueled by crop subsidies just like the demise of the fishing family in the U.S. has been, and will continue, under the misguided push for privatization of the marine resources. This just fuels the "big" buying up the "smaller", AND the smaller operators getting just plain outlawed.

The current thinking in current government circles is that privatization is a given, and that it's just an argument of who to give it all away to. This statement by the Fish and Game Department in Alaska is symptomatic of the fungus amongst us: "sectors that wish to proceed should not be held back by others." Uh, does that mean Charlie Manson shouldn't be held back by others? I rest my case.

Well, maybe I can't until people that say things like this are out of state government and there is a mechanism to keep them out. And that political candidates, and those helping them, make statements of their convictions: what they "stand for." And I don't mean like standing for a little dirt on your car, or this or that compromise. I mean a stand like Sarah Palin has made.

And to those Knowles campaigners who are so intent on dominating the Anchorage Daily News Blog, I not sure you know what you wish for. Remember, if you wish for patience and wisdom, you might get all kinds of trouble that will surely teach you wisdom and patience.

And totally off the subject, there is going to be a Tilth Conference:

"John, How was the sweat lodge event?(I was invited to attend a Blackfoot ceremony.) Will you be attending the Washington Tilth Association's meeting Nov. 10-12? (http://www.tilthproducers.org/conference.htm). I'm one of the speakers (Value-Added Martketing) but there are lots of great workshops, many of which deal with local food."

And this is the opener that I forgot to put on the previous article:

"John, Here is a opener for you: The Kodiak crowd has finally drawn up some Q & A's for those that represent absentee boat owners, especially those that live off island or out of state." I also retracted the part about Dick Powell giving $100,000 to Ben Stevens to influence his dad to ram "crab ratz" through, which he did without the consent of Congress. Even though the money transfer story has been passed around for years and not publicly refuted, I understand there is no hard evidence of it anywhere.