Agendas: they cover up the plundering

This interview piece in the Penninsula Clarion with the gubernatorial candidates reminded me how dangerous these GUYS are. 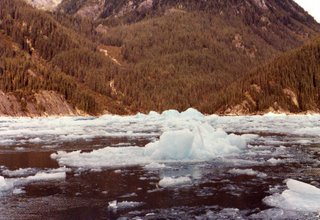 We had to paddle a speed boat for 8 hours out through here, at night, after a mini-tsunami swamped the motor.

After reading Halcro's solution to young Alaskans leaving the state, I now know why nothing ever gets done right in Juneau. Ray Metcalf had a good idea, just don't vote for anyone who was serving in the Legislature in Juneau, still had a heartbeat, and allowed Ben Stevens to gain the position he did.

That's not the only reason not to vote for Halcro. Even Tony the 'flip-flopper,' as Sarah Palin calls him, came right out and said, "I oppose it," when asked about the Pebble Mine project. Of course that's how Tony works, he says one thing, then does the opposite. But Halcro struck me as the classical politician; boilerplate answers right out of the text for "Political Culture 101: Applies To Any State." He needs to get a funnel for a hat and try to be the Tin Man in Wizard of Oz.

He didn't say one thing that indicated that he knows the smallest amount about the issues. Either that or he's hiding his agenda. Look at the statement from Sen. Brownback, speaking for the Republican National Committee: "Or will we keep America stronger and more secure by electing more Republicans who support our responsible agenda aimed at protecting our borders, making the tax cuts permanent and waging an aggressive fight against our enemy?" Not that I support either party's "agenda." The point is, why have something to use to polarize the nation. Why polarize the nation anyway? There's all these books on politics and how to be a "culture warrior." I say, just go out and help an old lady cross the street, so to speak.

Is allowing large Japanese fish companies gain control of our marine resources part of an agenda we want? No. It got on the agenda after we voted in folks who would just mindlessly dance to the music that a few powerful people picked. Halcro and Knowles danced to the music that people like Uncle Ted picked. That crankiest of all politicians, and remember, cranky equals loveless and callous.

I saw the classic show of a politician trying to bail out of Washington and get a Governorship the other day on C-Span. A well qualified, soft spoken, Iowa Secretary of State is running against one of their delegates to Washington. Caring and knowledgeable on Iowa issues versus fast talking, march to the music. I think in these days of low confidence in government, we should be looking for a little compassion in our leaders above all. These kind of folks will listen to you later on, and not listen to the money, as much. Note to Iowans: don't elect a Frank Murkowski or you'll be sorry.

Remember, Tony Knowles brought us "rationalization" of the Bering Sea fisheries. What is so rational about the price dropping last year to the king crabbers, the crew wages dropping 70%, 1,100 king crabbers losing their jobs, and now the price drops a whole dollar a pound at the dock? The few fishermen left might have gone along with the scheme before, because the competition on the grounds was cut back dramatically.

Now that the scheme is cast in concrete, they are hearing the music loud and clear. It's a version of the old song, "Take as much as possible while they aren't looking," lead vocalist - Ted Stevens, lead guitar - Frank Murkowski, back-up singer - Tony Knowles, drums - Kevin Duffy, business manager - Trident Seafoods' Chuck Bundrant, lighting - Bobby Thorstensen. And this band has a ton of groupies that make them seem like the best thing since peanut butter.

It appears that a letter written by Bobby Thorstensen, of Untied Fishermen of Alaska, declaring Kevin Duffy their "man of the year" is now being called the "Liar Letter." Where Bobby is calling Tony Knowles a liar in effect. I got this clarification: "John, I went back-"The man of the Year"(letter) -says Knowles "recanted"- and that he instructed Duffy to vote for a 70-30 split(processors-fishermen) rather than 90-10. Here is where he is called again a liar-"UFA firmly believes that Duffy acted under orders from Knowles." Duffy voted 90-10(on the North Pacific Council)."

Well, whoever was "turned," Knowles or his Commissioner of Fish and Game, it doesn't bode well for Knowles. Even more control was gained by the big processors. The NPFMC has a way of convincing any new councilor to join in the processor love fest. I hear Duffy now has a plush job with Trident Seafoods. Trident must have a whole building in Seattle just for folks that they got to swing things their way: burearcrats, editors, fishermen, councilors, etc. But if they can buy a $47 million French jet to fly folks around, they can sure afford a social service program for folks that have "turned," and I don't mean turned 65.

All this cloak and dagger, Spy vs Spy stuff in fisheries management and politics will be a thing of the past pretty soon. Sarah Palin, the Alaska gubernatorial candidate that stands for transparency, will be leading the non-groupies, and it's a much bigger group. Besides that, just in the last year and a half, the Internet has allowed a quantum leap in transparency. And the President of Google promises another quantum leap that will send the spin-meisters running for cover. That's probably why Ted Stevens wanted to put a kink in the Internet's "tubes."