Bottom trawling: Battle for the Gulf of Alaska

To Mr.Enge
It's plain that fishery managers/industry players and political allies are breaking National Standards that Congress has voted on. Shawn Dochtermann wrote this in the Kodiak Daily Mirror: 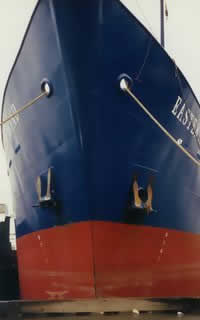 You have to watch the movie "The Corporation" to understand the "Battle for the Gulf of Alaska."

"Let's start with reference to the national standards (NS) of the Magnuson-Stevens Sustainable Fisheries Act. The RPP would never have passed Congressional hearings because it does not adhere to NS No. 5 and No. 9. NS No. 5 states: Conservation and management measures shall, where practicable, consider efficiency in the utilization of the resources; except that no such measure shall have economic allocation as its sole purpose. The RPP gives allocations as its sole purpose, preventing any other future or present fishers the ability to harvest more than 5 percent of the total allowable catch (TAC)."

You also hear efficiency and effective thrown out in a weak attempt to match the language in the National Standard No. 5 of the MSA. These terms refer to "efficiency" used as a verb to the word "utilization." Utilization, acording to Webster is: a noun, meaning - "to put to use ; turn to profitable or practical account." National Standard No. 5 is talking about getting the most out of the resource, NOT using the most efficient gear or catching the Total Allowable Catch quicker, or making fewer boats more efficient for the plants to deal with, etc. It means spreading the wealth around better, getting the multiplier effect really cranking on. Just the opposite is happening in Crab "Rationalization."

Sarah Palin, the leading candidate for governor, said the other day that Governor Knowles didn't understand the consequences when he pushed to get the two-pie system of allocating king crab through. And that the consequences of any plan to privatize the Gulf will need to be well understood.

The gentleman from Sant Point gets high marks for his concern for the truth. I would rather converse with a fisherman any day. First of all, Robin, I definitely do not get any compensation from anyone for opening up the discussion in broad daylight. I won't even go into what I have given up to do this so Alaskan fishermen and their sons can have a future. Hundreds of fishermen write me to thank me for this work. I don't have a clue what they think my efforts are worth to them personally and I have not asked them to put a price on it. It's really priceless.

A few clarifications: when I mentioned bringing up the bottom, I was really thinking of a Japanese method of dragging for octopi using all chain gear, and it too, of course would hang up on a rock outcropping. I know you use rubber rollers made from stamping disks out of truck tires and stringing them on a chain like a pearl necklace. But it rolls over everything down there that can't jump off the bottom and go into the net, or pull themselves down into a hole. Do we know exactly what that does to the bottom? Have we tried to find out? Would we care?

I do know what a dry clam dredge does to the bottom off the coast of New Jersey. It's pretty barren down there and the dredge was just raking the bottom for clams down six inches or so. I also saw a video of a hydraulic clam dredge on the bottom in the Bering Sea. Besides it plowing anything like crab off to the side, it didn't look like it was doing any harm to anything but a few worms. The fish and crab would come charging back around behind the dredge to get a smorgasboard of things to eat. Just like you describe for otter trawls. And they have been dragging beam trawls for shrimp in Thomas Bay near Petersburg for almost 90 years now. Just that we have to be careful, and I'm not convinced that every area that gets bottom trawled has been observed so closely.

"To Mr.Enge
My name is Robin Larsen. I have lived in Sand Point for all my life and have been involved in bottom trawling since we started here in the mid 80's. To say all bottom trawling is wasteful and destructive is niave. We do not have the problems with bycatch here in the Western Gulf that goes on around Kodiak.

Just look at the observer data. For the last few years we have been fishing on pins and needles around here waiting for the season to close because of halibut bycatch. Last year for example we heard NMPFS was closing it for bycatch and the fleet here sent 4 boats raceing for King Cove with our observer data. NMPFS assumed our bycatch was the same as around Kodiak, WRONG.

We cannot even come close to what goes on around there if we all tried. I know this because I have fished around Kodiak and will not bottom trawl there again. Oh, by the way, NMPFS was wrong in their assumption and the season reopened. We are trying to get the bycatch split between the Western and Eastern Gulf. If this happens you will see who fishes the longest and catches their quota(without being shut down due to by-catch).

Just this fall I was asking the plant to bring down my bottom gear and the plant manager told me the season was closing in a day and a half. I asked why. He said for halibut bycatch. WOW! No one even fished out here in the Shumagins. So in my opion it is wrong to condemn all bottom trawl fisheries, because they are all different. I can show you pics of almost 100% pure cod tows with little to no bycatch.

Don't get me wrong, I do not condone catching of coral and by-catch, etc. There are still fisherman out there trying their best to fish as clean as possible. Bottom trawling is and always will be the most cost effective way to catch cod if done in the proper manner. As far as destroying the bottom, I find it very hard to break a rock with rubber and netting, the rock wins every time. There are some studies that show trawling on the bottom actually helps by stiring up the nutrients.We see that here at Wooly Head for example.

Since we started trawling there in the 80's we have seen more differnt species and more fish there period then ever before. I too have a 58-foot combination boat that has a lot of halibut quota. Your commentary sounds like you are trying to get a bigger peice of the pie. If you are going to write these commentarys for your own gain this site will lose readers. I could go on and on but I will stop there. Feel free to share this letter with any one you like including the readers of the AKREPORT. In fact please do so. There are a lot of fishermen out there who share my opion. Thank you for your time"

I have to say too, that I was vaguely aware that you don't have bycatch down there in the Shumagins. I have reported before my experiences trying to fly cod from you guys to Korea. But if you want to talk about that we'll do it privately. I'm mostly mad at Trident Seafoods for threatening you guys with cutting you off from home heating fuel if you sold to us. I think boats like yours can and probably should be the boats of choice for the drag fisheries in the Gulf of Alaska. The boat in the picture above is the kind of boat I object to: it is too big to fit in Alaska harbor spaces, in effect violating National Standard No. 5 in not maximizing the benefit to the region. There should be a boat size limit like in salmon seining. I know you would love to have a bigger boat for seining Unimak Pass. Doesn't seem right to me all the way around.