Some things bear repeating, like this letter from a Kodiak fisherman and a long-time "voice crying in the wilderness" about social injustice in the fishing industry. 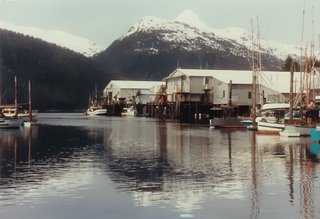 The plant in Pelican didn't need "linkages" or an "allocation" to get started again. Just plain old free enterprise. (This was almost my birthplace.)

(I also like to put stuff like this in my blog archives.) There are John Finleys all over in the ports. They are trying to make some money catching fish too. I just think current politics has fostered an army of new fishermen who the old halibut longliners called the "mad ones." That's a recipe for privatization that all Americans cringe about.

I don't go for giving away the fish into perpetuity. I just think it has the potential to hinder free enterprise to a point that the communities are no longer necessary. Technology in fishing vessels is getting that they mainly just need gas stations all over. And the Gulf of Alaska "Groundfish Pilot Program" won't really be a pilot program, but a way to get a boulder rolling down the mountain. How would you ever stop halibut IFQs(quotas) now for example? It's poor policy and pure greed that would encourage control of the marine resources by a few, instead of being owned by the public as it's always been.

How does government qualify as a referee for an industry it doesn't understand. Government's true role should be in making the stakeholders collaborate and not cop out and take sides. Government should replace a lawmaker, like NPFMC Chairwoman and processor's lobbyist Stephanie Madsen, who said to a representative for independent fishermen, "Don't you ever get tired of losing?"

Unfortunately, the big corporations and government in the seafood industry will need to be made to retrench to their inherent roles. The processors process the fishermen's fish, and the government makes sure the public's interests are protected. It's really very simple. Too many politicians have bit on the processors line of: you gotta protect us to protect the shore jobs. If you buy that I've got these deeds to Lunar landscape I'll sell you.

The Magnuson-Stevens Act said that fisheries management in the EEZ would be done by industry with the help of government. It's evolved into some nightmare of power and money grabbing. It all is a replacement for collaboration between stakeholders, but then when has the processing/government sector ever come clean with anyone. The souless corporation and souless government vs the independent fisherman can be pretty closely compared to godzilla vs bambi. Hence this fisheries scientist saying that future generations will only have jellyfish to eat the way things are going.

"Former Alaska Attorney General John Havelock's Anchorage Daily News' September 26th "Comment" is a must read if you're thinking the legal problems of the crooks selling off Alaska's resourses will just blow over. It's the straight story about the long hoped for cleaning of our political system."
Read Finleys column Here