The "Mother of all Raids": one Alaskan's role

I'll never forget Jesse standing on the railing of the Blind Slough Bridge on Mitkof Island, Alaska and his grandfather commenting on him being "fearless." He was younger and less hesitant than I was when I started jumping off the bridge as a kid in the 50s. 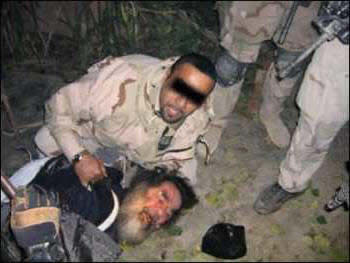 And I'll never forget how he loved to talk to retired men at gas stations on the highways in Alaska when he was only a couple of feet tall. Or when he kicked Bob Clark in the shins when he was barely out of kindergarden. Bob was a 6 foot, three inch, 240 lb fellow loan officer who had thought he could make an off-color remark about Jesse and get away with it. I think courage was a gift Jesse was born with.

Jesse started going hunting with me as early as just months old. His crying didn't do much for our success bear hunting one time though. By the time he was half a year old, he was going duck hunting with us. I don't know how many miles I carried him over his first few years, but I remember carrying him 12 miles up to Petersburg Lake and back once. Nagoonberry picking, blueberry picking, hunting, fishing: Jesse did it all by the time he was two. We all enjoyed the fact that you could put him under a blueberry bush and he would lay there and occupy himself with a blueberry feast while we were free to pick for the pantry. 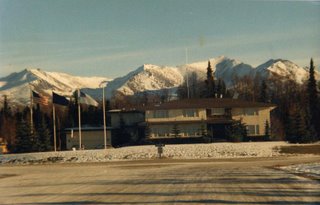 The Academy Jesse went to in Anchorage as a boy.

How he came to be on the team that was called to go pick up Saddam Hussein when he got to Iraq was not surprising to me. He commercially fished on a limit seiner out of Petersburg for a couple of years before we moved south in 2000. Then he worked as a wildfire fighter and was put on a Helitak team, also called "hotshots." Marriage brought on the responsibility to keep cash flow going at a steady clip every day of the year though, and that's when he joined the Army. And more outdoor challenges to boot.

The Fourth Infantry Division got to Iraq after the invasion of Bagdad was over. They kept on going up-country to the Sunni Triangle to bring order to the hot-bed area that Saddam was from and where he drew much of his inner-circle support. There were cousins, uncles, aunts of all stripes there by the bucket load. The army tried to make all the connections by computer, but a simulation of the connections was too mind boggling. They finally put up pictures of everyone on a wall and drew lines to Saddam. There were five main families who were close to him, so by rounding up the bodyguards and others who were helping and had helped Saddam, it was thought they would eventually get the No. 1 in the deck of most wanted.

It was the other deck of cards, the ones on all the bodyguards and others, that Jesse had in his pocket the day he ran down a suspect that had jumped out the back window when they busted in the front door. Jesse had liked to play football, and he also had gone to a Christian School in Anchorage, AK, so running the guy down instead of shooting him didn't surprise me. The chase was over fences and back yards of Tikrit for five blocks. When Jesse had him on the ground and had plastic wire ties on his wrists, he turned the guy over and checked his deck and sure enough he had a "wanted."

Jesse was in a Recon platoon and slept on the hood of his Humvee mostly. (I used to kid him that his job was to sneak up and paint red circles on the backs of the enemy.) In fact they had gone slightly wild and got kicked out of at least one mess tent when they were "in town." He had been pulled in to help with the "roundup" in Tikrit and at one point had been in on 80 live captures. Donald Rumsfeld came to Iraq to stress that finding Saddam was a high priority politically. The troops started looking in the sewers, the fields, everywhere. Earlier, on the Fourth of July, Jesse was slogging through fields in the dark in 115 degree heat, with a 100 pound pack, looking for weapons caches. That will always mean a lot to me.

I watched the History Channel's production of the whole capture last night, so had the rest of the story to go with what I'd already heard. Jesse's tales corroberated the History Channel's. From the time the Army got the tip that Saddam was in a house on the other side of the Tigris river from Tikrit to the time they got there it was an hour and a half. The troops only took 45 minutes to get there for their part. There was only time for a bunch of Special Forces guys and three platoons to scramble. There was a batallion coming behind them though.

What the History Channel didn't tell was that the actual capture amounted to Special Forces going to the house, and the three platoons of Regular Army forming a perimeter around the house to watch their backs. It was the guys Jesse was with that caught Saddam's two bodyguards coming through the perimeter. They had the nighvision equipment so it was no trouble seeing a warm body in the black dark. They called in what they had to the Special Forces guys, who then searched about every square inch of the house and it's surroundings. They had found things in the house and a vent pipe along side a tree. That's when they found the spider hole.

It was a whole lot of detective work and a Division-wide "git 'er done" attitude that found Saddam Hussein. I'm real proud of my son's involvement and his watching one of the most despotic dictators in history being loaded in a chopper to go to jail. I want to record here some of the names of the officers and men and women I saw on the History Channel program, the ones I could write down quick enough: Major General Ray Odierno, Col. James Hickey, Col. Steve Russell, Major Stan Murphy, Captain Tim Morrow, Sgt. Brian Grey, Angela Santana at Batallion HQ and a Sgt. Major Wilson. Hopefully I haven't botched their ranks and names too bad.

There were a lot of names that Jesse threw out, as did the TV program: Special Forces Commander, Raider Brigade, the Strykers, "Cesear Romero", who Saddam looked like in his "on the run look." Someone had called in that "they had Cesear Romero," and that settled who they had.

Jesse has been pretty tight lipped about the whole episode so I was surprised at the amount of detail the History Channel had come up with, and interviews they were able to get. But then he was always the master of the understatement. In Alaska you always had some wild exploit if you wanted to go out and have some fun. When you got back, it was just another day outdoors. But get a good sized Alaskan outdoorsman, mix a good dose of bravery, three parts of good judgement, one or two parts leadership, a gift for mechanical things, including uncanny hand-eye coordination, and you have the makings of a first rate international peace-keeper.

Jesse will be going back to Iraq in March of 2007 as a Sergeant instead of a Private First Class like last time. I don't know what he does, except that painting red targets on enemy backs apparently now involves him working real close with the Air Force. And this time when he goes back, I can just trust that the huge plexiglass bubble of protection for he and his buddies will still be there. I had dreamed of seeing a small row of whitewashed Mid-East style houses at night and a fifty yard in diameter bubble of protection over them with Jesse and other soldiers in there somewhere. Maybe it was a prophetic vision of the "Mother of all Raids," as the History Channel called it.

(Jesse Enge was born in Petersburg, Alaska April 28, 1982, a fifth generation of a Petersburg pioneering family. He graduated from High School in Dallas, OR. He currently lives in Lacy, WA with his wife and year and a half old son (who somehow got me on their cell phone recently and repeated "baby" over and over. He must have been imitating dad, as Jesse calls Errin "baby." Not as costly as his dad redialing a international phone number at about the same age.)