Separation of Fish and State

There is a movement in California that espouses Separation of Oil and State. The goal is to get politicians to quit taking money from oil companies, or at least admit that they do. Diane Feinstien wasn't able to admit that she takes oil money and was noted that for the first time in the observer's recollection, she actually looked at her feet and seemed "small." Is this what the Democrats mean by taking the oil industry to task now? 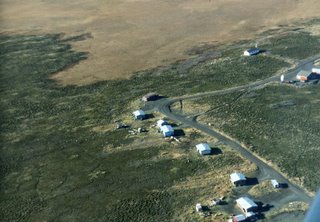 Speaking of small, if you blink flying over Port Heiden, you'll miss it.

Now that the gate is open, we might as well let them all out to pasture: Separation of Pharmaceuticals and State, Separation of Construction and State, etc. Well, personally, I think I'll just focus on Separation of Fish and State for now. It might be shooting a little high to try fix our "paid-for politics" all at once. And, yes, the Democrats have their Santa Clauses too.

Getting back to fish, "State" also includes the processing sector and those fishermen that they "own." "The commercial sector provides a range of tangible values to society such as providing a steady supply of fish to the community which in turn enhances the overall health benefits to society* that accrue from the regular consumption of seafood," said Mr Barratt.

Dan Ogg is a former legislator who got three key pieces of fisheries legislation on the books. And they included the bill that enabled the Regional Seafood Development Associations. They are forming up like clockwork, in Alaska and with any luck, they will be models for other regions of the country. They will take the pressure off the Fishery Management Councils, and doubly so when they get their act together enough to work with scientists directly. I admit I'm a little biased, because I wrote the White Paper that got the first bill on the topic written in the early '90s.

I also have a speech to the Kodiak Borough Assembly by Stephen Taufen on Gulf of Alaska "Rationalization." Ya gotta listen to Stephen, because he's been following the North Pacific Fisheries Management Council proceedings like a bloodhound for 15 years, as a first rate fish accountant and culture warrior. I guarantee he's been like "white on rice" on these issues like I have been on the RSDA issues. Here it is:

"Good evening, I'm Stephen Taufen of the Groundswell Fisheries Movement. And I just talked to some guys out on a crab boat, where rule number one is 'stay on the deck.' But it looks like the GOA Task Force has built quite the plank for you to walk. And it's interesting to see some of you are already in the water, struggling.

And this resolution and much of what is said seems, if I may say it, just a bit too provincial, given these are national fisheries.

Maybe all this goes back to where we started? So I'd like to tell you that in the early 1970's, as a geographer I studied African diamonds, the Hawaii Big 5 cartel, and other historical cases of "rationalizations".

And the global definition of rationalization was the destruction of local, sustainable, multi-species, diverse agricultural systems and related businesses. Replacing them with a mono-culture agriculture system that is owned by distant corporations and their shareholders. That turns what were once self-sustaining small businesses in a region into mere wage earners, it indentures them to those distant owners. And it removes the reasons for careful conservation and the preservation of local businesses.

It's a distinct and destructive form of capitalism, ...it's Corporatism, .or just plain greed. That's why the large corporations and their lobbyists who want it are the only ones here squealing when our community and people won't allow such a takeover. And they are here giving you glowing versions of the task force's results that are really just a faction's consensus.

The Rational Price is the Competitive Price! But their first two recommendations are anti-competitive, and totally inflexible. Remember, it's competition that is flexible. And you were also sworn into office with a pledge to obey both the state and federal constitutions. And that means Equality, Due Process, and protecting against Indentured Servitude, and the state requirements for 'common use' of resources.

Also, the Fishery Conservation and Management Act goes back to the Laws of the Sea Conferences of the 1960's and 1970's. The United States does not even OWN these world fisheries. It merely has a stewardship control over them. So, I think you'll find, in the end, that the allocations of these resources to major global corporations, especially through processor quotas, directly violates the World Trade Organization's restrictions against nations subsidizing particular corporations - as monopolies - to be the winners in trade.

I think that's where we are headed, in the end, and that all this will be declared illegal at some point. So I hope that you keep all of this in mind as you deliberate further. And thanks for all of your careful consideration of the issues. We appreciate your efforts."

AlaskaReport's server crashed the other day when the site got overwhelmed Monday by 44,000 unique visitors. That amounted to 308,000 page views and maybe millions of hits. It's incredible to me, since the town I grew up in might sell that many newspapers in a year. What I don't understand is Alaska advertisers' reluctance to use websites like this one to get their message out, especially if it's a product. Maybe all the fuss had partly to do with that story about my son helping capture Saddam Hussein the day after he was sentenced.

I need to add a comment about this news article:http://www.indybay.org/newsitems/2006/11/08/18327873.php In it, the optimists, on fish surviving our manipulations, cite the rockfish as the one species off the Oregon and Washington coast that fishing is not allowed on at all. And much of the fuss in the North Pacific Council and Congress is over plans to TARGET GULF OF ALASKA ROCKFISH, WITH FACTORY BOTTOM-TRAWLERS. So in one sentence you have three red flags: those rockfish that live as long as humans, factory ships, and bottom trawlers. Wow, what a combination. Just throw the word ecosystem right out the window.

Those rockfish the big companies want are mixed up down there with everything else: two dozen other species of rockfish, bottom cruising king salmon (it's the best hunting down there), forests of sealife attached to the bottom, other commercial species like halibut and black cod, etc. This is what that article in Science Magazine on Nov. 3 was talking about. But the crux of the matter is the corporate people who are making the laws on the F.M. Councils are just trying to maximize their profits. Heck, realtors charge whatever the market will bear, why shouldn't these fish companies try to get whatever they can too? And is it their fault politicians take their money? Keeping politicians from these fish companies' money would be a great boon to fish. Any lawmaker of any stripe that has taken fish company money should be sidelined from making fish laws.

The fledgling movement of collaboration between scientists and fishermen, like in the Oregon troll fleet, and fishermen with fishermen in the RSDAs, is all that is important. All the rest of this fisheries jousting is just entertainment. I think we should put out all the banners and blow trumpets every time there's a North Pacific Fisheries Management Council Meeting. Up till now, the Black Knight has been cleaning everyone's clock. More specifically, cleaning out the ocean.