"Stopped by a shoal of salmon," (Captain Cook) 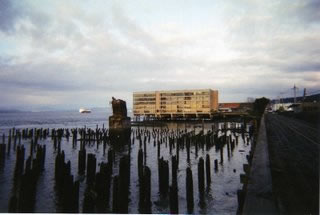 This lone hotel on the Astoria, OR waterfront is testimony to the wisdom of short term profit taking by the big fish companies as well as "ecological macular degeneration."

"But, he says, the concept of protecting fish stocks by protecting biodiversity does make sense. 'This is a good compelling case; we should protect biodiversity, and it does pay off even in simple monetary terms through fisheries yield.'"

Protecting stocks demands the political will to act on scientific advice - something which Boris Worm finds lacking in Europe, where politicians have ignored recommendations to halt the iconic North Sea cod fishery year after year. Without a ban, scientists fear the North Sea stocks could follow the Grand Banks cod of eastern Canada into apparently terminal decline.

Of all the dozens of articles I've seen on the "Boris Worm Report" this one was worth reading. It invokes a righteous indignation over the cavilier way the fish stocks are treated. Granted there are accidents. Like when the Canadians blew part of the mountainside into the Frazer River and killed off a run estimated to be over 100 million sockeye a year. Or when Captain Cook tried to sail up the Amur River in the Russian Far East and was "stopped by a shoal of salmon." Well, Cook might not have killed them off with that ramming as much as Stalin did by ordering larger canned packs every year.

You won't find the real story of what is happening in my favorite part of the world, the North Pacific, in the government documents. You won't see that trawlers are known to catch the wrong school of fish because their sonar can't tell fish apart. Some fishermen can tell them by the shape of the schools and the intensity of the echo. But how many deck loads of king salmon or cod ends full of herring have to be brought up dead and thrown back before government does something, or at least acknowledges it happens.

The amount of king salmon caught and thrown back every year that IS reported is between 200,000 and 300,000 individuals. This is largely a self monitoring system. The North Pacific Fisheries Management Council, which is made up of company representatives and lobbyists, rubber stamp the figures instead of doing any more investigation. Granted, you wouldn't put a dent in the pollock stocks without midwater trawls. Bottom trawls are a different matter entirely, and the Gulf of Alaska Rockfish Pilot Program is all about turning them loose en-mass.

We are heading into a brief window of opportunity before Christmas for Republicans to do their worst and ram a Reauthorization of the "200 mile limit law" down our throats that guts the free enterprise system in fisheries. "Craig Pendleton, a Saco fisherman who heads the Northwest Atlantic Marine Alliance, said Allen has emerged as leader in the House on fisheries issues. He has been pushing national policy standards that would protect New England's fisheries from being taken over by corporate fishing interests if individual fishermen are allotted annual catch quotas."

This is what the American public was talking about. Corruption run rampant to the demise of our basic institutions, such as fishing fleets and communities that support them. Sure a couple of gigantic ships can catch all the fish that a whole fleet can and save all that fuel, but that's not what the public said it wanted. Especially in Alaska. Hear that Ted? But like I was just reading about the Concentration Camps in Germany, there are plenty of willing people acting as "kapos." They serve those in control, and in the current case, that would be the large corporations.

Unwitting reporters quote them all the time, because it's the kapo's job to control the "population" by pretending to be on the same side of the fence. One of the most egregious of these in the current fight for and against freedom in the fishing industry is none other than The Marine Conservation Alliance. They apparently believe that if the MSA isn't reauthorized before the next session of Congress, "the Democrats won't get anything." Newsflash, they will get plenty. They will save the free enterprise system in the fishing industry. The problem lies in the fact that reportors don't know who the "kapos" are. They are well disguised, cloaked in many high-faluti'n sounding organization names, personally flaunting impressive sounding titles. Eventually we'll expose all of them for what they really are.

The fishing industry isn't the only battlefield in corporate largess vs humanity. Last year Congress passed the Energy Policy Act of 2005, establishing 3,500 foot wide "energy corridors" all over 11 Western states. They amount to an area about the size of four Rhode Islands. They go through pristine wilderness that drains into salmon streams and rivers. There are already 200 foot wide corridors for power lines. What in tarnation do the power companies need corridors two thirds of a mile wide for? They could build a town up on top of the Cascade-Siskiyou National Monument for example and let the crud flow down into the Rogue and Klamath Rivers. Well maybe that's a stretch, but you can be sure power companies don't care for anything but their bottom line, and contributing to the hand that feeds them.

I did a report with my son when he was in Dallas High on this kind of thing. Of grave concern is cutting migration routes for wildlife, not to mention clearcutting down to the grass on an Amazonian scale. Nationwide, they will impact 286 special places like this. The energy companies already are going to get some $28 billion in tax breaks, but now will have the ability to access the Federal Government's emminent domain powers. Hope your Indian village or ranch isn't in their way.

These may be the last big grab efforts of the waning Republicans, and a desperate and hurried effort to appease the corporations that kept them in power, and would keep supporting them. I predict that in the not-to-distant future, a couple of years, we'll have software that can rate the justifications for these "grabs" by probability of "correctness." Otherwise known as the "B.S. Meter."