The rest of the title to the paper, referred to in my title is: "Gear Impacts and International Cooperation in the Bering Sea." 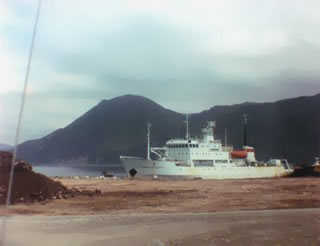 I took this picture of a Russian research vessel in Dutch Harbor in 1991. The Mayor at the time, Paul Fuhs, used to really roll out the red carpet for visiting Russian ships.

And predictably, the environmental group who authored it is really down on bottom trawling for it's known adverse impact on the environment. They also point out similar problems on both sides of the Bering Sea with business interests influencing fisheries management. In particular, the lack of a strict conflict-of-interest clause in the Magnuson-Stevens Act.

This paper is a good start in understanding the complexities of maintaining healthy marine resources in the Bering Sea, the "fish basket" of the U.S. We need more understanding by a lot more folks before we get a handle on some of the problems facing the fisheries. This paper doesn't address more recent data on the movement of fish populations northward toward Russian waters, much to the chagrin of the pollock trawlers. But maybe to the joy of P. cod fishermen out of Nome who have been seeing an influx of the species up there in recent years.

Back in 1990-91 and scientists were telling me some areas of the Bering Sea were 4 degrees F. warmer than usual. The only reason we're now saying the sky is falling is because there is no denying it anymore. The guys in Nome find they have to learn to skip from ice floe to ice floe over the water on their snow machines to keep doing what they do. (That's not unusual though, some guys have been running up and down the Stikine River with paddle-tracks on their machines for years. Maybe a new type snow machine/jet ski combination is needed if the Arctic is going to keep on melting.)

Back then a U.S. Army Corps of Engineers guy told me, "you can't say that," about rising sea levels. I wasn't going to anyway, because of such a slow process. But what about all the federal fisheries management folks who say the same thing about fisheries issues? In the first case it was a giant breakwater project that started and finished. In the second case it is a daily occurence in federal fisheries management. Just watch how all the "elephants in the room" are ignored, or not seen, in the upcoming North Pacific Fisheries Management Council meeting. There are solutions, but they won't come from Washington D.C. or through the conflicted interests that make up the Council. They will come from people who hold entrepreneurship and free enterprise for everyone, and the whole of the ecosystem, above all else.

The State of Alaska did hire some other economists to take a crack at Gulf of Alaska fisheries management issues. I hear that the State made reference to them in a paper of their own, and maybe a few quotes, but that's about all. Putting the full text of these outside economists' papers on the Internet doesn't seem to be on the menu at this time. We have known that transparency was one of the missing planks in Murkowski's platform. It was one of the ones that made such a hole that the Governor fell completely through.

We could also use a little more transparency on the $27 million that was given to "Trevor McCabe and Alaska Fisheries M." That's all the information you'll get when you do a search of public records. (This search result was produced as a project of OMB Watch. The data was obtained from the U.S. Census Bureau's Federal Assistance Award Data System (FAADS)). I'm going to guess that this is part of the $38 million or so that Sen. Ted Stevens sent to his former aide in Alaska. He may call it pork for his state, but only about $2.5 million was made available from the private non-profit Alaska Fisheries Marketing Board to the public. I understand that you couldn't even get Trevor McCabe, et al. on the phone.

The Heritage Foundation says there is no information on where pork comes from and where it goes, just a partial reference, like the one above. No wonder the GAO can't find where $28 billion went to. They did have a novel idea though. You just write to a paper pledging to follow one piece of pork through the whole process. They just can't stand this scruitiny, so the project suddenly dissappears. Kind of like turning on the lights in a cheap Florida motel and watching the cockroaches scatter. Anyone want to follow the D.C. outfit that is getting a quarter of a million dollars to teach Jazz in Alaska public schools?