I never agreed with the Robspierre approach, just whacking everyone involved in the old guard. There is some real talent there. A lot of them were just trying to make a living. But if you want to get that comment off your chest, go to the Alaska Transition Team web site. 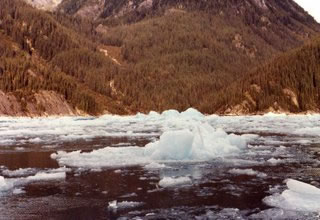 Alaska isn't the only place that is wrestling with the logic of it all. Eastern Canadian Provinces are talking the language of the Alaska coffee shop, that is, "what in tar is going on and how do we fix it." "In the past our approach to rationalization was a government funded buyback. Government assumed responsibly for it and paid the full shot. This time around we are not talking about that approach."

"Penney says if the owner-operator policy is not dealt with, large companies could buy up any enterprises that go up for sale, turning the fishery into group of companies instead of the traditional family-owned enterprises. He also worries that downsizing in the processing sector will have the same outcome, with a few large corporations running everything. "What does that do for communities?" he ponders."

A lot of what we are dealing with in fisheries management today is just plain unadulterated corruption, and at the highest levels. The higher the level, the greater the sense of being above the law it seems. This prosecutor in Peru won the Transparency International achievement award.

"Dr. Magallanes is one of the most respected prosecutors in Peru, and has been the leading force in the prosecution of approximately 1,500 members of the criminal organisation headed by Vladimiro Montesinos, the primary collaborator of former president Alberto Fujimori. Her work against corruption led to the arrest of the highest profile figures in organised crime, including Fujimori himself, his primary accomplice, 14 generals from the armed forces and police, the former president of congress, the former federal public prosecutor (her boss), supreme court justices, judges and prosecutors at various levels along with media magnates, among others. Her efforts also helped initiate the recovery of more than US $250 million stolen by the corrupt network. In an area plagued by mediocre, corrupt and fearful judicial workers, Dr. Magallanes is a source of inspiration for a new generation of judges and prosecutors. Dr. Ana Cecilia Magallanes Cortez, (Peru) prosecutor".

Now that the Federal Grand Jury in Anchorage, the prosecutors, and the FBI are finally subpoenaing those I had been talking about for the last 20 months, I can move on. With Christmas fast approaching, I wish no jail time on most of the folks involved, just that they get out of the way of progress for fishermen and their communities. The Judicial system can sort out what should be done with them. And stop the downward spiral momentum. That seems to have started with the processors lobbyist leaving the chairmanship of the North Pacific Fisheries Management Council for another "big company association" position. Which coincided with ending the rush to "rationalize" the Gulf of Alaska the same way they "rationalized" the Bering Sea.

So, things are looking up for Alaska: Governor Palin said she was selling the jet, halting the road-to-nowhere project and restoring the Longevity Bonus program for the old folks. There is now an "Ethics Chief" in the new Administration. I think plain honest folk are being appointed right and left. The "tone" in the new Administration is the same as how I've been writing, and as Harry Truman said: "I don't give 'em hell, I just tell the truth and they think they are in hell." The McDowell Report on State of Alaska Seafood Economic Strategies is on the same wave length as I've spoken for many years, as have others. In recent years we've had a window of opportunity to get our message out in a bigger way through AlaskaReport.com. Is good contagious? Is the reason for the season there to season our reason? I think so.

Maybe now that the new Administration has some good ideas for improving the process by which problems are solved in the fishing business, we can look foreward to all working together for a change. It might not be so well-oiled to start with, with stakeholders pulling in all different directions. But, with a process for improving the dialogue all the time, it could self-adjust like a guided missle, to home in on maximizing the benefit for Alaskans, like the Alaska Constitution says.

The Rand Corporation is a leading consulting firm in the world, and they say that the variables are just too numerous to look at just a handful of options. That there are thousands of scenarios, and with software for the purpose, they can be manipulated to see outcomes of various positions. It's a variation on the forthcoming lie detector software that Google is working on. This Administration might be the window of opportunity Alaska has waited over a century for.

For example, how is the growing acidity of the ocean likely to affect whether gillnetters in Bristol Bay be allowed to use bigger vessels to bleed, gut and refrigerate their catch on board? Right now, this, and even the most basic scenarios, are a big question mark. There also needs to be a channel into State Government for everyone who has an idea that might help. Ideas are going to win the day in the global race for market share, not power plays between stakeholders. Those days could be declared gone with the right process put in place in the near future.

When I started seriously looking at all these things twenty three years ago as acting economist for a fisheries bank, the norm was to use "cumulative guessing." There was a lengthy questionaire sent around and Bob Waldrop and myself filled it out for the Bank. It was called the "Delphi Project." Think about it. What kind of information do you get when every last person responding tries to answer, "How many salmon do you think the North Pacific can support?" No baseline data of original run strength, no trends in phytoplankton production, nothing. Just pure guessing. Can we afford to run the fishing business with volunteer Boards any longer?