Alaska fisheries management should be outside the vacuum

Wouldn't it be great if Alaska took a look at how the "outside" did fisheries management? From my vantage point, you'd think the North Pacific Fisheries Management Council operated in a vacuum. Like someone said in this article on managing Florida's $6 billion fishery, "red drum don't live in a vacuum." 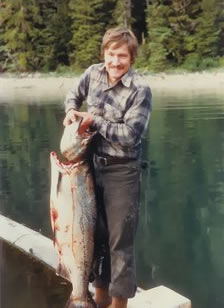 A big king salmon I landed from a 8 foot Sport Yak. I felt like the "Old Man and the Sea" with it towing me all over.

The common ground of all the stakeholders in a several year effort to include the public, through workshops, was that the environment was the No. 1 consideration.

So how does this stack up against the NPFMC's effort to clearcut the ocean floor in the Gulf of Alaska using bottom trawlers? It doesn't. The North Pacific Council does what it does just because it can. Like in "What does a 800 pound gorilla like to do? Anything he wants." When you get the conflict of interest factor out of fisheries management, then invite the public to participate. As it is, the Council process is just for show.

Now you have young Alaska fisheries reporters, some of whom don't know the names of the major fishing ports in Alaska, quoting special interests as "the industry." They wouldn't know the "industry" if it fell on them from the sky. The Governor of Alaska was elected by a landslide by regular folks that wanted a change from all the corruption and self-dealing in government. (They are the industry, they own the fish, what little that hasn't been stolen already by the Council.) Fisheries management being part of government, and just as bad as the oil industry. And Senator Stevens and our intrepid "press corps" keep beating the old refrain. (See article in the Juneau Empire)

Ethan Berkowitz is the Governor's point person on ethics in government and he isn't happy with the Anchorage Daily News. But then the ADN has a long history of unpaid, Saturday philosophy sessions for their reporters. No wonder Bloggers like me don't give them a lot of credit. The problem is that they mislead the public, and mislead law-makers who don't do their own homework.

Another problem is that the independent press is not capitalized, doesn't have an agenda because they don't coordinate their efforts, is easily discouraged, and often intimidated. They are like a trout on a hook, a lot of flopping around but not getting anywhere. Consistent effort does work though. Those that would enter the seafood industry in Alaska need to keep an eye on the official reports of Governor Palin and Ethan Berkowitz's progress in creating an open and honest environment for GOOD law-making. If they get their way, and aren't stymied by Alaska's intrepid legislators, I may yet be able to recommend my favorite industry to a young career seeker.