President Bush has family fishermen in the MSA crosshairs

The Gunny says that cannister shot took the civil right out of Civil War. Well, this contributor points out enough shot to fill a cannister round against family fishermen. Taken all together, in the Reauthorization Bill of the Magnuson-Stevens Fisheries Management and Conservation Act, independent fishermen will be in a world of hurt. 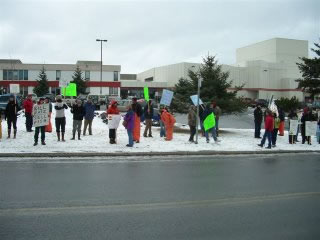 Kodiak folks demonstrated against the Stevens/corporate industrial complex last winter. Nothing much changed.

I reckon that President Bush is the one with his finger on the firing mechanism now. Well, we don't give the Dems a whole lot of credit for letting this thing get into the President's hands in the first place. Maybe they are going to do some reforming, but they better do their homework a whole bunch better or it's de javu all over again.

"It could not be more clear - there are many special provisions tucked in the MSA Reauthorization Bill, and President Bush should NOT sign this bill into law, until FBI probes complete their job! This is a rough list of issues and provisions to review and comment on regarding special interest provisions in S.Amdt.5224 Ted Stevens (re. House Amendments to Magnuson-Stevens Fisheries Act). Isn't a Senator enriching his son and friends a crime in this nation? Priority one should be to identify benefits to companies already (currently) under FBI probe/subpoenas, or who benefited from Alaska Fisheries Marketing Board largesse, led by Ben Stevens and Trevor McCabe.

There is ample reason here for President Bush to refuse to sign the bill altogether. The other senators are well versed on the conservation needs and could quickly construct a more clean bill without these end-runs of public process, without valuable resource allocations to culprits.

a.. Extension of Rockfish Demonstration (Pilot) Program from 2 to 5 years - did not go through RFMCouncil process, a legislative end-run, serves companies under subpoena (such as Trident). This is a major resource allocation shift! Favors those who dealt directly with Reps. Pombo and Young and Sen. Stevens' staff to get this special extension before the pilot program even began.

b. Grandfathering clauses (read entire bill carefully) - reprivatizations and sector splits in Alaska fisheries, to avoid renewed scrutiny and application of new laws to those efforts.

c. SE Alaska Buyback program - to be managed out of same building as AFMB (under federal investigation) by same parties, etc. $25,000,000 - designed to serve price lowering entities, antitrust efforts by companies under investigation.

e. Certain CDQ groups continue their march toward Discriminatory preferences over other native tribes, taking a share off the top from real fishermen, as if a tax on those who still have to pay taxes. Ted has given a lot of money to CDQ groups, a few have even hired Ben.

f. Conversion to Catcher/Processor Shares (read, evaluate its effects) - gives Ted Stevens' associates a means to get even richer without public debate at regional fish councils. g.. Change in rule from having 50% of permit holders by adding OR 50% OF POUNDAGE - serves Alaska Groundfish Data Bank and Ak Draggers and their Processors - that includes members of AFMB board under scrutiny, members of processors under subpoena etc. Serves companies like Trident too.

h. New allowance for collective processing of Northern BS/AI crab (specifically winter opilio season), goes against Crab Ratz purposes, moves jobs offshore, and otherwise serves Trident primarily - a firm under subpoena. Special rights not afforded others; and a consolidation - special legislation package that did not go through Council process, either. Undercuts promises of the Crab Rationalization to ensure more jobs. Monopolizes this fisheries for Trident's sake, for the most part.

i. Unconstitutional and discriminatory 2/3 referenda protection is only offered to N.E. States and special provisions for Gulf of Mexico - violates Equality Clause because West Coast and Alaska do not get this protection for its family-based fleets and local communities. Ted cares not about the Constitution nor fair and equitable.

j. Regional Fisheries Associations - could be constructed of Independent Operating Companies who are owned by a major processor, with its fleet - and cause sector split or other allocative arrangements. (read, analyze, outline effects and identify who it benefits specifically). It is another scheme desired by the companies who have misspent AFMB funds and >control prices etc.

k. NB: the bill needs to be analyzed for other ways it helps, such as loan guarantees etc., only special interests. It is clear that lobbyists helped write these Amendments in the back halls of DC, for special corporate welfare at the expense of other citizens.

l. This is not a set of "market based solutions" but rather Soviet >style collectivism, or more accurately it is the creation of coercive monopolies granted exclusive allocations in resource extraction trade, asset commoditization that promises to harm the coastal economies of the Nation, severely.